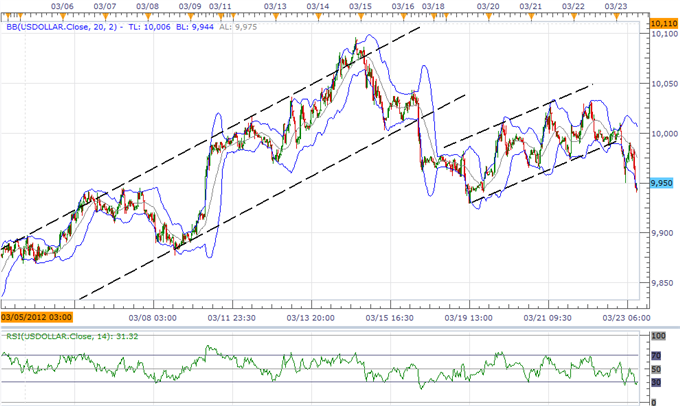 The Dow Jones-FXCM U.S. Dollar Index (Ticker: USDollar) is 0.48 percent lower from the open after moving 108 percent of its average true range, and we may see the short-term correction gather pace as the greenback fails to maintain the upward trending channel from earlier this week. In turn, the index may fall back towards 9,900, but we should see the dollar consolidate once Europe goes offline as it remains oversold. As the economic docket for the following week is expected to encourage an improved outlook for the U.S., a slew of positive developments should help to prop up the greenback, and we may see the dollar regain its footing going into April as the central bank talks down speculation for more quantitative easing. 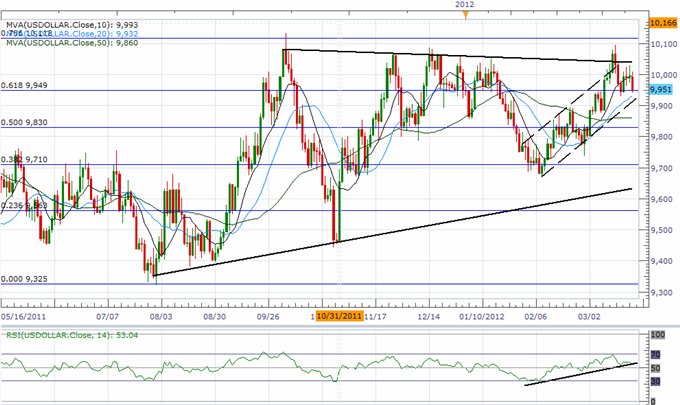 Indeed, St. Louis Fed President James Bullard held a hawkish tone while speaking on Bloomberg Television, stating that the ‘ultra-easy’ policy heightens the risk for inflation, and argued that monetary policy may be at a ‘turning point’ as he sees the central bank normalizing policy in late 2013. As the stickiness in price growth paired with the more robust recovery raises the risk for inflation, we may see the FOMC ultimately drop its 2014-pledge, and the central bank may continue to ramp up its fundamental assessment for the world’s largest economy as the recovery gets on a more sustainable path. However, the committee may look to extend ‘Operation Twist’ amid the ongoing weakness in the housing market, and we may see the central bank gradually lift the interest rate off the record-low while further dampening long-term rates in an effort to balance the risks for the region. Although we maintain a bullish call for the USD, we may see the correction gather pace next week as the relative strength index threatens the upward trend from earlier this year, but the index looks to be carving out a higher low in March as it continues to bounce along the 61.8 percent Fibonacci retracement around 9,949.

All four components advanced against the greenback, led by a 0.58 percent rally in the Australian dollar, while the Euro gained 0.55 to mark a fresh weekly high of 1.3292. However, as the fundamental outlook for the euro-area remains bleak, we are still watching for a head-and-shoulders top in the EURUSD, and the major reversal pattern should continue to take shape as long as the pair holds below the 2/9 high (1.3320). As the region continues to face a risk for a major economic downturn in 2012, the European Central Bank may have to do more to avoid a prolonged recession, and we are likely to see the Governing Council keep the door open to expand its balance sheet further as the governments operating under the single currency become increasingly reliant on monetary support. As the EURUSD maintains the range from earlier this month, we should see the pair continue to carve out the right shoulder, and we will need a break and a close below 1.3200 to see the reversal pattern play out.