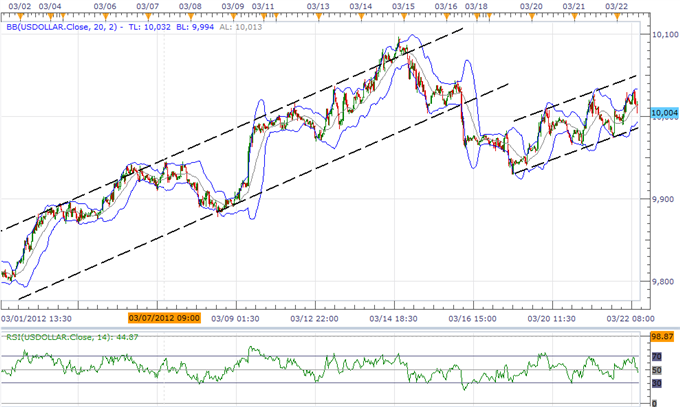 The Dow Jones-FXCM U.S. Dollar Index (Ticker: USDollar) is 0.08 percent higher on the day after moving 89 percent of its average true range, and the greenback should appreciate further over the near-term as it carves out a new upward trend. Nevertheless, we could see a small correction over the next 24-hours of trading as the 30-minute relative strength index falls back from a high of 67, but we will maintain our bullish call for the dollar as the Fed continues to talk down speculation for additional monetary support. In turn, a pullback in the index should provide buying opportunities for currency traders, and the bullish sentiment underlining the USD should gather pace throughout 2012 as we expect the central bank to conclude its easing cycle this year. 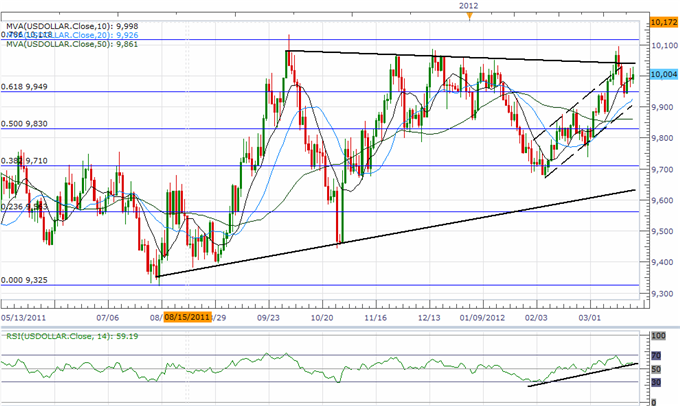 Indeed, St. Louis Fed President James Bullard struck a hawkish tone for monetary policy as he expects inflationary pressures to pick up this year, and we may see the Fed lay the groundwork to start normalizing monetary policy as sticky prices paired with the more robust recovery raises the risk for inflation. The shift in the policy outlook should prop up the USD going into April, and we may see interest rate expectations pickup throughout the first-half of 2012 as the central bank drops its dovish tone for monetary policy. In turn, we’re still looking for another run at the 78.6 percent Fib (10,118), and we should start seeing a clearer trend in the dollar index as the fundamental outlook for the world’s largest economy continues to improve.

Three of the four components weakened against the greenback, led by a 0.87 percent decline in the Australian dollar, and the high-yielding currency should continue to give back the advance from earlier this year as the fundamental outlook for the $1T economy deteriorates. As China – Australia’s largest trading partner – continues to face a risk for a ‘hard landing,’ we should see the Reserve Bank of Australia keep the door open to lower the benchmark interest rate further, and the AUDUSD looks poised for a major downturn as the 200-Day SMA (1.0404) gives out. As the aussie-dollar appears to be stuck within a downward trending channel, we expect to see the sharp decline from earlier this month to gather pace going into April, and the exchange rate may come up against the 38.2 percent Fib from the 2010 low to the 2011 high around 0.9930-50 as it searches for support.