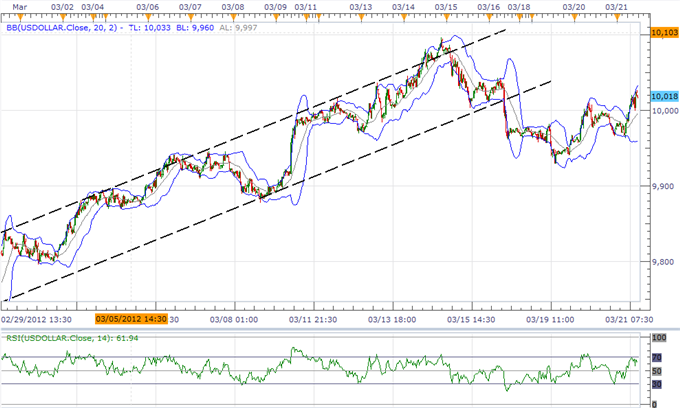 The Dow Jones-FXCM U.S. Dollar Index (Ticker: USDollar) is 0.21 percent higher from the open after moving 96 percent of its average true range, and we may see the reserve currency appreciate further during the North American trade as the shift away from risk-taking behavior gathers pace. However, as the 30-minute relative strength index falls back from a high of 69, the pullback in the oscillator may ultimately lead to a short-term correction, and we may see the dollar consolidate over the remainder of the week as market participants weigh the prospects for future policy. Nevertheless, the shift in the policy outlook reinforces our bullish forecast for the USD, and the reserve currency should appreciate further throughout the year as the Fed looks to normalize monetary policy. 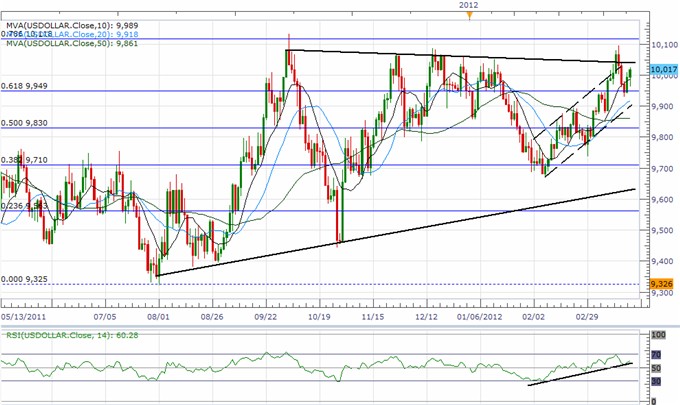 Indeed, Minneapolis Fed President Narayana Kocherlakota curbed speculation for another round of quantitative easing, arguing that the FOMC should look to drop the zero interest rate policy (ZIRP) later this year, and we should see the committee continue to soften its dovish tone for monetary policy as central bank officials take note of the more robust recovery. At the same time, Fed Chairman Ben Bernanke talked down the risks surrounding the world’s largest economy, stating that U.S. banks could withstand potential shocks coming out of Europe, and the central bank head may continue to strike an improved outlook for the region as the recovery gets on a more sustainable path. As relative strength index maintains the upward trend from earlier this year, we are still looking for another run at the 78.6 percent Fibonacci retracement around 10,118, and the shift in central bank rhetoric should continue to prop up the dollar as interest rate expectations pick up.

All four components continued to weaken against the USD, led by a 0.40 percent decline in the Australian dollar, while the Euro shed 0.25 despite the positive headlines coming out of the region. Indeed, Fed Chairman Bernanke said European policy makers ‘need to step up and do a lot more’ in addressing the sovereign debt crisis, and the global community may continue to push the EU to take a more proactive approach in curbing the risk for contagion as the fundamental outlook for the euro-area remains bleak. Moreover, Mr. Bernanke warned that ‘further strengthening of the European banking system’ will be required as the region continues to face a risk for a prolonged recession, and we may see the European Central Bank continue to carry out its easing cycle this year in an effort to shore up the ailing economy. As the head-and-shoulders top in the EURUSD takes shape, we are looking for a major selloff in the exchange rate, and the pair should come up against the 23.6 percent Fib from the 2009 high to the 2010 low around 1.2630-50 to test for support.