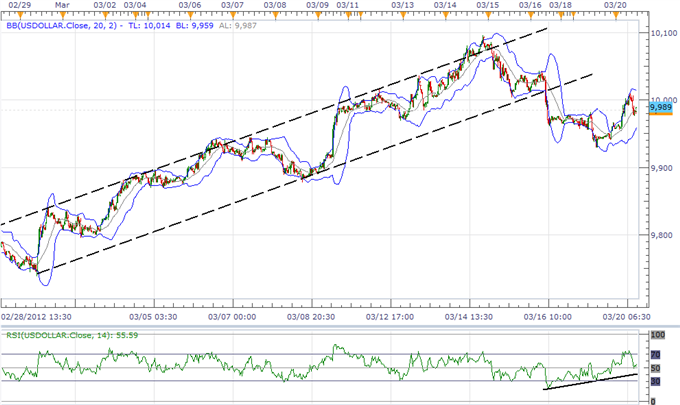 The Dow Jones-FXCM U.S. Dollar Index (Ticker: USDollar) remains 0.46 percent higher on the day after moving 111 percent of its average true range, but the greenback may face increased volatility over the next 24-hours of trading as Fed Chairman Ben Bernanke is expected to speak on monetary policy at 16:45 GMT. Although we’re seeing the 30-minute relative strength index fall back from overbought territory, the upward trajectory in the oscillator instills a bullish forecasts for the reserve currency, and the pullback may provide a buying opportunity for currency traders as the fundamental outlook for the world’s largest economy improves. As the Federal Reserve takes note of the more robust recovery, the central bank certainly has limited scope to push through another large-scale asset purchase program, and we may see Chairman Bernanke endorse a wait-and-see approach for the first-half of 2012 as the pickup in economic activity paired with sticky prices raises the risk for inflation. 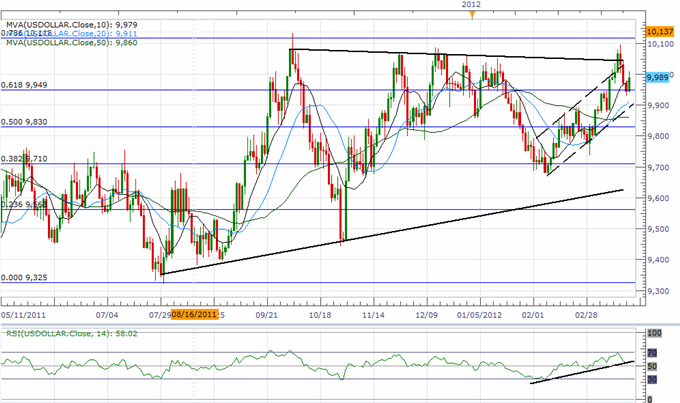 As the USDOLLAR trades back above the 61.8 percent Fibonacci retracement (9,949), the greenback looks poised to make another run at the 78.6 percent Fib (10,118), and the bullish sentiment underlining the greenback should gather pace as we expect the FOMC to curb speculation for more quantitative easing. As the recovery gets on a more sustainable path, the Fed will need to come up with a more detailed exit strategy, and the central bank may lay the ground work to start normalizing monetary policy as growth prospects improve. Indeed, the upward trend in the relative strength index reinforces our bullish call for the USD, and the index may finally breakout of the broad range carried over from the previous year as market participants see the FOMC lifting the benchmark interest rate ahead of the 2014 pledge.

All four components weakened against the greenback, led by a 1.16 percent decline in the Australian dollar, and the high-yielding currency may face additional headwinds over the near-term as the fundamental outlook for the $1T deteriorates. Although the Reserve Bank of Australian Minutes struck a neutral tone for monetary policy, the slowdown in China – the region’s largest trading partner – dampens the prospects for future growth, and we may see the central bank reestablish its easing cycle in an effort to stem the downside risks for the region. According to Credit Sussie overnight index swaps, market participants still see more rate cuts on tap for the next 12-months, and we may see interest rate expectations deteriorate further over the near-term as the region remains reliant on an export-led recovery. Nevertheless, as the AUDUSD gives back the rebound from the previous week, we should see the pair find support around the 200-Day SMA (1.0406), but a break below the moving average would expose the 23.6 percent Fib from the 2010 low to the 2011 high around 1.3050-60, which roughly lines up with the 100-Day SMA (1.0377).