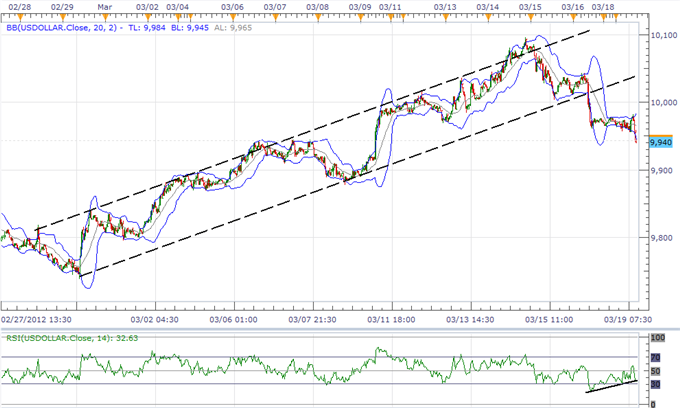 The Dow Jones-FXCM U.S. Dollar Index (Ticker: USDollar) is 0.35 percent lower from the open after moving 68 percent of its average true range, but we should see a rebound over the next 24-hours of trading as the 30-minute relative strength index continues to come off of oversold territory. The upward trend in the oscillator should push the index back above 10,000, and we expect the near-term rally to gather pace as the fundamental outlook for the world’s largest economy continues to improve. As the Federal Reserve takes note of the more robust recovery, market participants speculate the central bank to start normalizing monetary policy ahead of the 2014-pledge, and we should see the Fed continue to soften its dovish tone for monetary policy as the rise in economic activity heightens the risk for inflation. 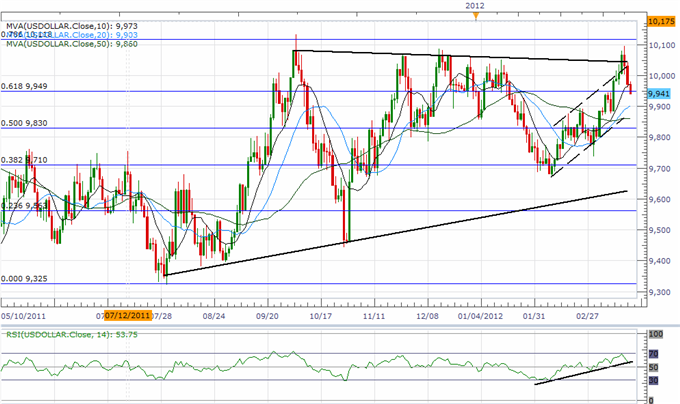 Indeed, New York Fed President William Dudley struck an improved outlook for the region, stating that the developments coming out of the real economy have been ‘a bit more upbeat,’ and the shift in central bank rhetoric reinforces a bullish outlook for the USD as interest rate expectations gather pace. According to Credit Suisse overnight index swaps, market participants have begun to price a rate for the next 12-months, and the stickiness in inflation may continue to prop up interest rate expectations as the Fed maintains its dual mandate to ensure price stability while promoting full employment. As the USDOLLAR gives back the rally from the previous week, we are looking at 9,900 for trendline support, but we will be keeping a close eye on the relative strength index as it threatens the upward trend carried over from the previous month. Should we see a break in the oscillator, a drop in the RSI would negate our call for another run at the 78.6 percent Fib (10,118), and we may see a short-term correction before a move higher.

All four components advanced against the greenback, led by a 0.53 percent rally in the Euro, but the recent strength in the single currency is likely to be short-lived as the heightening risk for contagion continues to bear down on investor confidence. Beyond the ongoing turmoil in Greece, the weakening outlook for Spain and Portugal continues to pose a threat for the region, and we may see the EU step up its effort to address the sovereign debt crisis as the European Central Bank looks to conclude its easing cycle this year. However, the ECB may have little choice but to push the benchmark interest rate below 1.00% as the governments operating under the single currency become increasingly reliant on monetary support, and we will maintain our bearish call for the euro as it continues to carve out a head-and-shoulders top in March. As long as the February 9 high (1.3320) holds, we should see the major reversal pattern pan out over the near-term, and a close below 1.3000 could open the door for another test of the 23.6 percent Fib from the 2009 high to the 2010 low around 1.2630-50 as the fundamental outlook for the region remains bleak.