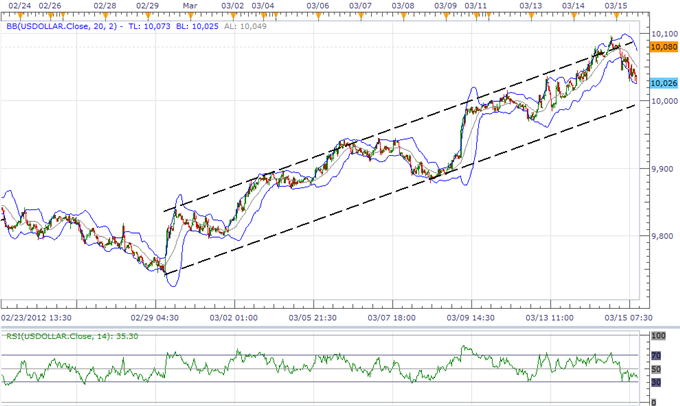 USD Correction To Taper Off On Higher Inflation, GBP Building Base

The Dow Jones-FXCM U.S. Dollar Index (Ticker: USDollar) is 0.43 percent lower from the open after moving 113 percent of its average true range, and the greenback may continue to consolidate over the remainder of the week following the false break of the upward trending channel. In turn, we may see the index fall back towards 10,000 to test for near-term support, but we may see the greenback regain its footing over the next 24-hours of trading as the economic docket is expected to reinforce an improved outlook for the U.S. As the 30-minute relative strength index continues to hold above oversold territory, we may see the index track sideways throughout the North American trade, and we may see the dollar end the week on a higher note should the data highlight a greater risk of inflation. 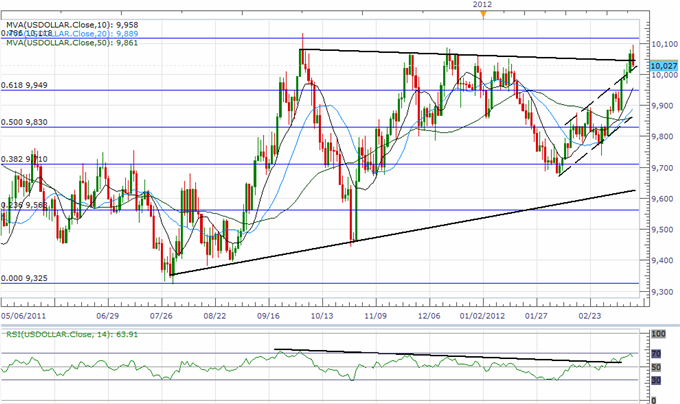 As the headline reading for U.S. inflation is expected to increase at an annualized rate of 2.9% for the second month in February, the stickiness in price growth limits the Fed’s scope to expand its balance sheet further, and the data could spur a bullish reaction in the dollar as market participants scale back bets for another large-scale asset purchase program. In turn, we may see the upper bounds of the channel come in as new support, but the lack of momentum to clear the 78.6 percent Fibonacci retracement (10,118) could fuel the short-term reversal from the yearly high (10,097) as the relative strength index falls back from a high of 69. Should the USDOLLAR struggle to hold above 10,000, we should see the index find interim support around the 61.8 percent Fib (9,949), and the bullish sentiment underlining the dollar should gather pace going forward as the Fed curbs speculation for QE3.

Three of the four components advanced against the greenback, led by a 0.69 percent advance in the Australian dollar, while the British Pound was little changed as it maintains the narrow range from earlier this week. The GBPUSD should continue to track sideways over the remainder of the week as market participants wait for the Bank of England Minutes due out on March 21, and we may see the policy statement prop up the sterling should the central bank talk down speculation for additional asset purchases. Indeed, BoE board member Ben Broadbent said efforts by global policy makers to stimulate the world economy ‘‘could warrant a withdrawal of monetary accommodation,’ and we may see the Monetary Policy Committee soften its dovish tone for monetary policy as central bank officials expect to see a stronger recovery in 2012. In turn, the GBPUSD could be building a short-term base to retrace the decline from earlier this month, and we may see the pound-dollar ultimately make another run at the 23.6 percent Fib from the 2009 low to high around 1.6250 as currency traders curb bets for more QE.