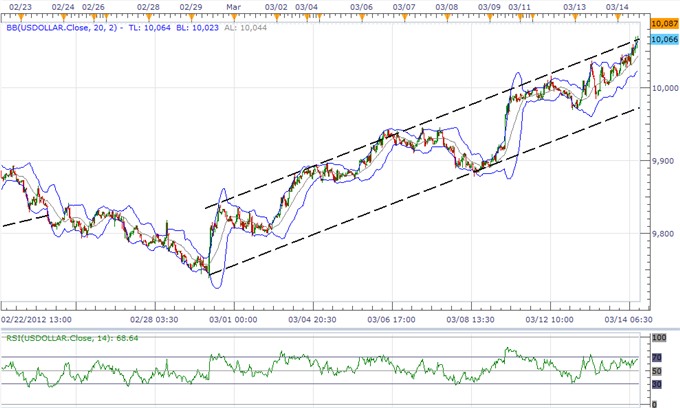 The Dow Jones-FXCM U.S. Dollar Index (Ticker: USDollar) is 0.50 percent higher from the open after the Fed curbed speculation for more quantitative easing, and the shift in the policy outlook should continue to prop up the greenback as the central bank takes note of the more robust recovery. Indeed, the less dovish remarks from the Federal Open Market Committee reinforces our bullish call for the dollar, and we should see the reserve currency continue to retrace the decline from the previous year as developments coming out of the U.S. keeps the Fed on the sidelines. However, as the index comes up against the upper bounds of the upward trending channel, we should see a small pullback before another move to the upside, and the dollar may consolidate in the coming days as market participation tends to thin ahead of weekend. 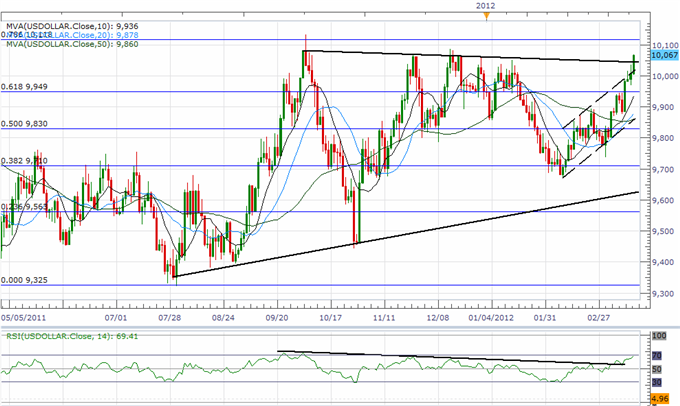 As the USDOLLAR breaks out of the broad consolidation pattern carried over from the previous year, the index looks poised to make another run at the 78.6 percent Fibonacci retracement, but we will be keeping a close eye on the relative strength index as it approaches overbought territory. A move above 70 would strengthen our view for a run at the 78.6 percent Fib, but a pullback in the oscillator could foreshadow a near-term correction for the USD amid the marked appreciation in March. Nevertheless, we should see the FOMC continue to soften its dovish tone for monetary policy as growth and inflation picks up, and the committee may look to conclude its easing cycle in 2012 as central bank officials expect to see a stronger recovery this year. In turn, currency traders may turn increasingly bullish against the USD, and easing bets for QE3 is likely to dampen the correlation between the dollar and risk as the fundamental outlook for the world’s largest economy improves.

All four components weakened against the greenback, led by a 0.98 percent decline in the Australian dollar, and the high-yielding currency may face additional headwinds over the near-term as the fundamental outlook for the $1T economy deteriorates. Indeed, market participants are looking for more rate cuts from the Reserve Bank of Australia amid the slowing recovery, and the central bank may take additional steps to shield the region as China – Australia’s largest trading partner – continues to face a risk for a ‘hard landing.’ Indeed, China said it will take steps to encourage private sector lending, and we may see the People’s Bank of China ease monetary policy throughout 2012 as the government curbs its outlook for growth. In turn, we may see the RBA follow suit, and speculation for lower interest rates reinforces a bearish outlook for the AUDUSD as the pair carves out a lower top coming into March. However, as the aussie-dollar comes up against the 200-Day SMA (1.0408), the moving average may provide near-term support, and we may see a small bounce before a key break to the downside.