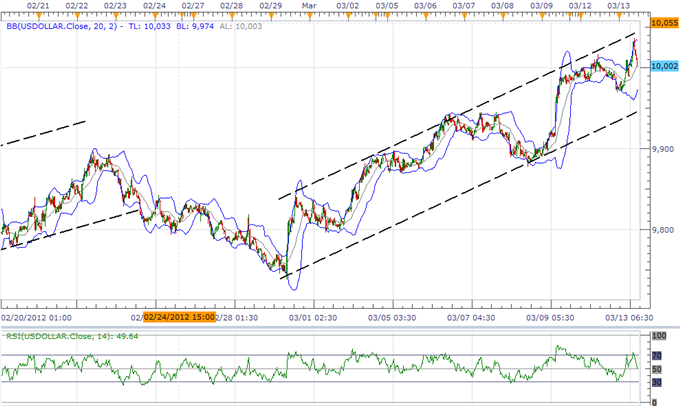 USD Overbought Ahead Of FOMC, JPY Weakness To Gather Pace On BoJ

The Dow Jones-FXCM U.S. Dollar Index (Ticker: USDollar) remains 0.08 percent higher on Tuesday amid the shift away from risk-taking behavior, and the greenback may consolidate ahead of the Federal Open Market Committee interest rate decision as market participants weigh the outlook for monetary policy. Indeed, the index looks poised for a small pullback as the 30-minute relative strength index falls back from overbought territory, but the bullish sentiment underlining the dollar should gather pace over the near-term as the fundamental outlook for the world’s largest economy improves. In turn, we should see dollar continue to retrace the decline from earlier this year, and the index looks poised to mark fresh highs for the year as the central bank changes its tune for monetary policy. 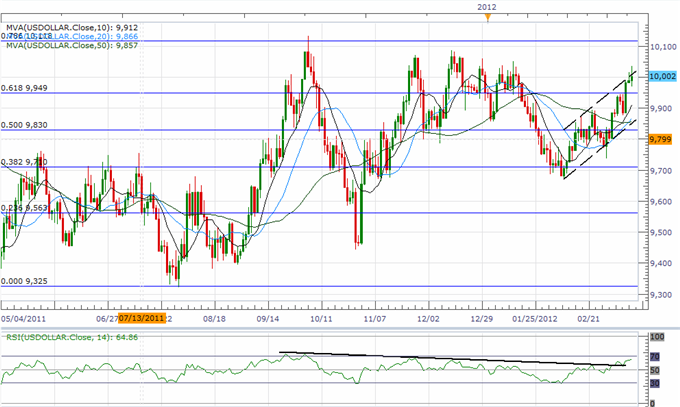 Although the FOMC is widely expected to maintain its current policy in March, the statement accompanying the rate decision could spark a bullish reaction in the USDOLLAR as Fed officials take note of the more robust recovery. In turn, we should see the central bank continue to talk down speculation for more quantitative easing, and the FOMC may ultimately raise its fundamental assessment for the region as the recovery gets on a more sustainable path. At the same time, the committee may look to extend ‘Operation Twist’ amid the ongoing weakness in the housing market, and we may see the FOMC endorse a wait-and-see approach throughout the first-half of the year in an effort to stem the downside risks surrounding the region. However, the pickup in growth and inflation may bring end to the Fed’s easing cycle in 2012, and the index looks poised to make another run at the 78.6 percent Fibonacci (10,118) as market participants scale back bets for QE3.

Two of the four components advanced against the greenback, led by a 0.47 percent rally in the British Pound, while the Japanese Yen shed 0.61 percent as the Bank of Japan pledged to take additional steps to shore up the world’s third-largest economy. Although the BoJ preserved its current policy in March, Governor Masaaki Shirakawa swore to ease monetary policy further in order to meet the 1 percent target for inflation, and the Japanese Yen may continue to trade heavy over the near-term as the central bank looks to extend its easing cycle. As the board looks at new measures to shore up private sector activity, the shift in policy casts a bullish outlook for the USDJPY, and the pair looks poised to track higher over the near-term as relative strength index crosses back above 70. Although the oscillator indicates that the dollar-yen is overbought, the recent rise in the exchange rate looks poised to gather pace until we see the index fall back below 70.