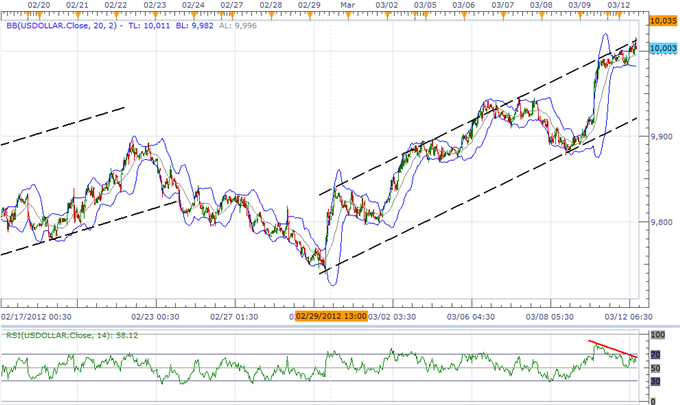 The Dow Jones-FXCM U.S. Dollar Index (Ticker: USDollar) is 0.17 percent higher on the day as market participants scaled back their appetite for risk, and the bullish sentiment underlining the greenback may gather pace over the near-term as the fundamental outlook for the world’s largest economy improves. Indeed, the more robust recovery limits the Fed’s scope to push through another large-scale asset purchase program, and we may see the central bank talk down speculation for additional monetary support as growth and inflation picks up. However, as the USDOLLAR comes up against the upper bounds of the ascending channel, the downward trend in the 30-minute relative strength index is likely to produce a short-term pullback in the index, and we may see a small correction before a larger move to the upside. 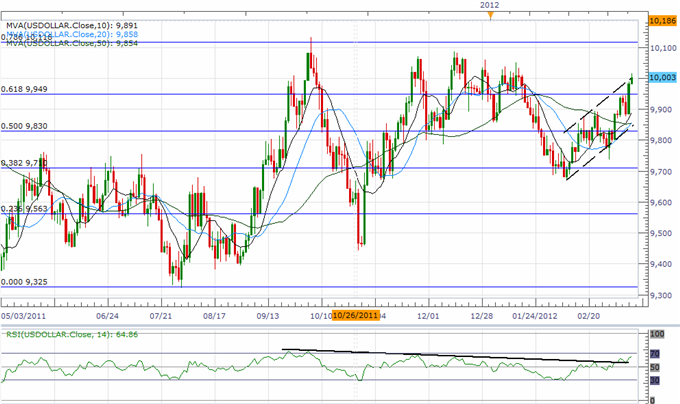 Although the FOMC is widely expected to maintain its current policy in March, the statement accompanying the rate decision may prop up the USD should Fed Chairman Ben Bernanke refrain from to commenting on QE3. Indeed, Mr. Bernanke may paint a positive outlook for the world’s largest economy in light of the more robust recovery in the labor market, and a less dovish statement could spur another run at the 78.6 percent Fibonacci retracement (10,118) as investors curb bets for additional monetary support. As growth and inflation picks up, the central bank may see scope to conclude its easing cycle in 2012, and the shift in the policy outlook instills a bullish outlook for the USD as the recovery gets on a more sustainable path.

Two of the four components weakened against the greenback, led by a 0.74 percent decline in the Australian dollar, and the high-yielding currency remains poised to face additional headwinds over the near-term as the slowdown in China – Australia’s largest trading partner – casts a weakened outlook for the $1T economy. Indeed, it seems as though policy makers in China will ease policy throughout 2012 in an effort to foster a ‘soft landing,’ and we may see the Reserve Bank of Australia follow suit as the central bank aims to combat the slowing recovery. According to Credit Suisse overnight index swaps, market participants see at least 50bp worth of rate cuts over the next 12-months, and the recent weakness in the aussie may gather pace over the near-term should interest rate expectations deteriorate further. As the AUDUSD carves out a top coming into March, we may see the pair come up against the 200-Day SMA (1.0410) to test for near-term support, but a break below the 23.6 percent Fib from the 2010 low to the 2011 high around 1.0350-60 could lead the pair to give back the advance from earlier this year.