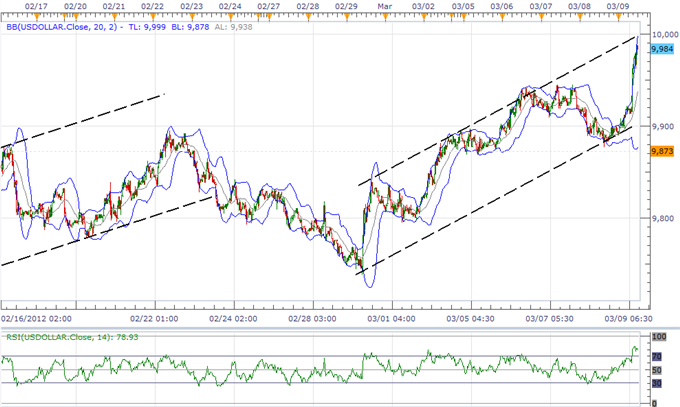 The Dow Jones-FXCM U.S. Dollar Index (Ticker: USDollar) is 0.94 percent higher from the open as the Non-Farm Payrolls report topped market expectations, and the reserve currency may appreciate further in the following week should the FOMC talk down speculation for additional monetary support. However, as the reserve currency remains heavily overbought, the index looks poised for a small pullback, and we may see the dollar fall back towards 9,900 before making another run to the upside. Nevertheless, as the USDOLLAR tracks within an upward trending channel, the reserve currency should continue to recoup the losses from earlier this year, and the bullish sentiment underlining the dollar may gather pace next week as market participants scale back expectations for another round of quantitative easing. 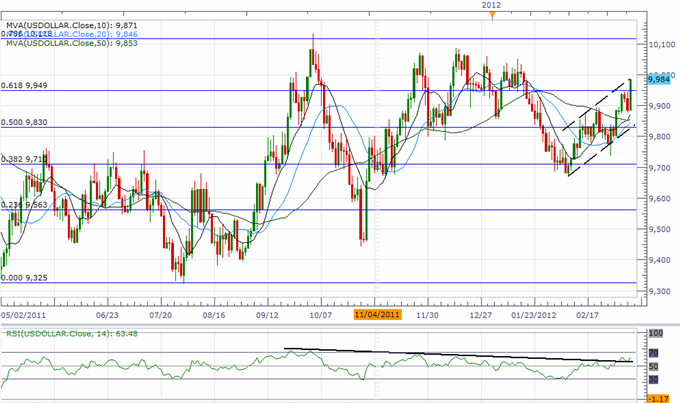 Indeed, the more robust recovery in the labor market may encourage the FOMC to strike an improved outlook for the world’s largest economy, and the central bank may see limited scope to push through another large-scale asset purchase program as growth and inflation picks up. The shift in the policy outlook certainly appears to be dampening the correlation between risk sentiment and the USD, and fundamentals may start playing a greater role in dictating price action for the greenback as bets for QE3 dissipate. As the index pushes back above the 61.8 percent Fibonacci retracement (9,949), the dollar looks primed to make another run at the 78.6 percent retracement (10,118), but we would like to see a small pullback lay the ground work for another leg higher.

All four components weakened against the greenback, led by a 1.24 percent decline in the Euro, while the Japanese Yen shed 1.20 percent ahead of the Bank of Japan interest rate decision on tap for the following week. Although the BoJ is widely expected to maintain its zero interest rate policy, we may see the central bank look to expand its balance sheet further in order to meet the 1 percent target for inflation. Indeed, the Yen may weaken further in the following week as the central bank reverts back to its easing cycle, and the USDJPY may continue to recoup the losses from the previous year as market participants see the BoJ taking additional steps to shore up the ailing economy. However, the downward trend in the relative strength index could bring about a short-term correction in the exchange rate as the pair remains overbought, and we may see the fall back to support around 80.50 before making a move higher.