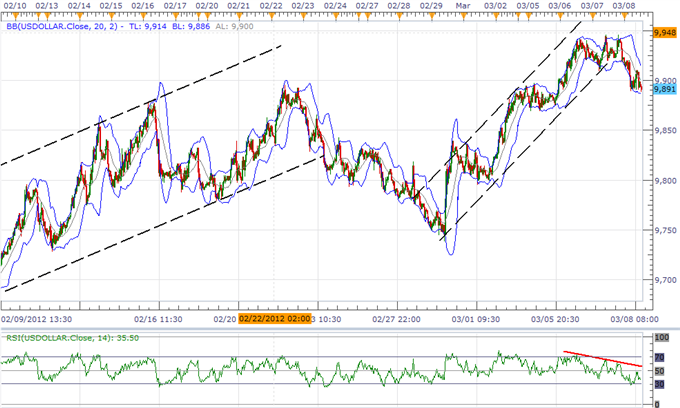 USD Correction To Taper Off Ahead Of NFPs, Sterling Outlook Clouded

The Dow Jones-FXCM U.S. Dollar Index (Ticker: USDollar) is 0.38 percent lower from the open amid the rebound in risk-taking behavior, and we may see the greenback continue to give back the advance from earlier this week as the upward trending channel gives out. As the bearish divergence in the 30-minute relative strength continues to pan out, we are likely to see the dollar track lower throughout the North American trade, but we should see the index consolidate going into Friday as employment in the world’s largest economy is expected to increase another 210K in February. 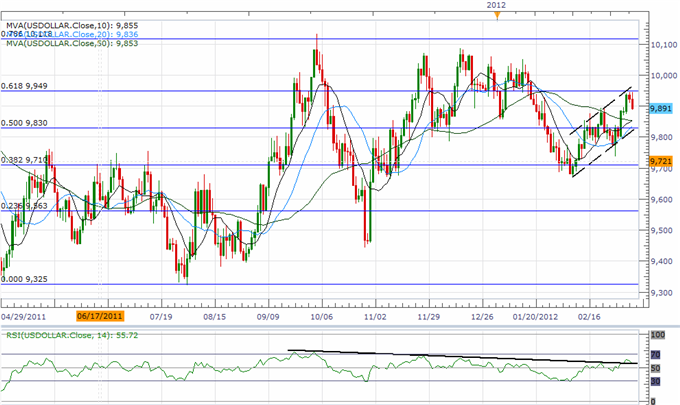 Indeed, the lack of momentum to clear the 61.8 percent Fibonacci retracement (9,949) could drag the index down towards the 50.0 percent Fib (9,830), but we should see the rebound from 9,738 gather pace as we are now looking at a broader upward trending channel for the index. As the USD carves out a higher low coming into March, we should see the 50.0 percent Fib come in as interim support, and it seems as though it will only be a matter of time before we see another run at the 78.6 percent Fib (10,118) as the fundamental outlook for the U.S. improves. Therefore, the more robust recovery in the labor market may prop up the USDOLLAR, and we may see fundamentals play an increased role in dictating price action for the reserve currency as the Federal Reserve talks down speculation for another round of quantitative easing.

Three of the four components continued to gain ground against the greenback, led by a 0.87 percent advance in the Euro, while the British Pound advance 0.51 percent amid the muted reaction to the Bank of England interest rate decision. As the BoE refrained from releasing a policy statement, we may see the GBPUSD maintain the range-bound price action ahead of the policy meeting minutes due out on March 21, and the fresh batch of commentary from the Monetary Policy Committee may spur a bullish outlook for the sterling should the central bank continue to soften its dovish tone for monetary policy. As the BoE anticipates to see a faster recovery this year, it seems as though the MPC will preserve a wait-and-see approach throughout 2012, but the central bank may see scope to start normalizing monetary policy going into the 2013 as the committee sees a diminishing risk of undershooting the 2 percent target for inflation. As the GBPUSD remains well supported by the 50-Day SMA (1.5674), we could see another run at 1.6000, but the technicals certainly paint a mixed outlook for the pound-dollar as the relative strength index maintains the downward trend from February.