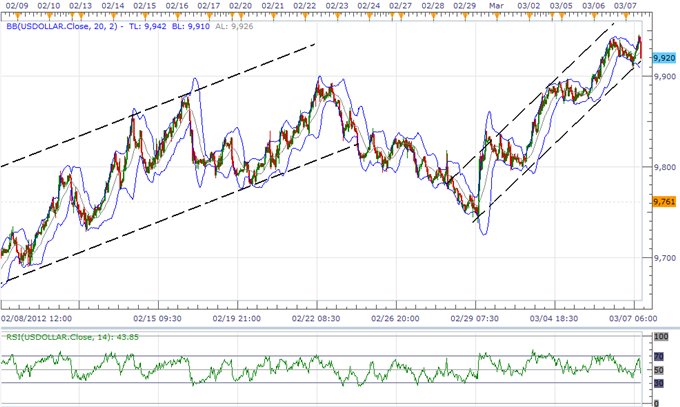 The Dow Jones-FXCM U.S. Dollar Index (Ticker: USDollar) is 0.13 percent lower from the open after moving 65 percent of its average true range, and we may see the greenback continue to give back the advance from earlier this week as it threatens the upward trending channel from the end of February. As the 30-minute relative strength index falls back from a high of 67, we may get a small pullback before another move to the upside, and we will keep a close eye on 9,900 as former resistance should now act as new support. Nevertheless, as the ongoing improvement in the labor market dampens the Fed’s scope to push through another large-scale asset purchase program, the rebound from 9,738 should gather pace in March, and we may see market participants turn increasingly bullish against the USD as the central bank scales back its dovish tone for monetary policy. 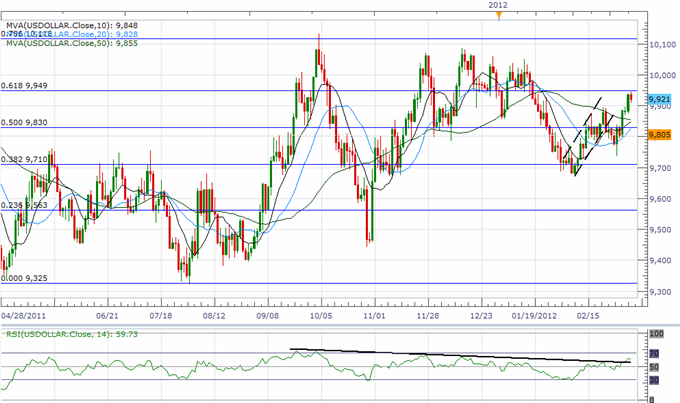 The technicals certainly fosters a bullish outlook for the USD as the 10-Day (9,850) and 20-Day (9,829) SMA’s look poised to cross above the 50-Day (9,855), but the lack of momentum to clear the key 61.8 percent Fibonacci retracement could ultimately produce a short-term correction in the index. In turn, the USDOLLAR index may revert back to the 50.0 percent Fib before we eventually get a move higher, and we expect to see another run at the 78.6 percent Fib (10,118) as the fundamental outlook for the world’s largest economy improves. As the recovery gets on a more sustainable path, we may see the FOMC scale back its pledge to retain the zero interest rate policy (ZIRP) well into 2014, and the committee show a greater willingness to start normalizing monetary policy towards the end of the year as growth picks up.

Three of the four components rallied against the greenback, led by a 0.33 percent advance in the Euro, and headlines coming out of the region may continue to prop up the single currency as Greece rushes to reach a deal with private creditors. As the Greek PSI talks take center stage, hopes of averting a default could prop up the EURUSD over the next 24-hours of trading, and we will also be keeping a close eye on the European Central Bank interest rate decision as market participants see the Governing Council expanding monetary policy further in 2012. Beyond the rate announcement, we’re very interest to hear the policy statement from ECB President Mario Draghi amid the recent rise in overnight deposits, and it seems as though the second Long Term Refinancing Operation may not be having the desired effect as commercial banks horde cash, and the central bank head may see scope to push the benchmark interest rate below 1.00% in an effort to pull the economy out of recession. Nevertheless, with the slew of major event risks on tap for the remainder of the week, we may see whipsaw-like price action in the EURUSD, but the pair remains poised to weaken further over the near-term as European policy makers struggle to restore investor confidence.