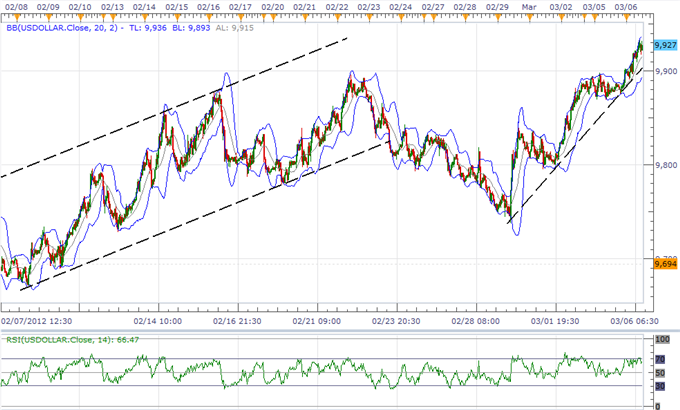 The Dow Jones-FXCM U.S. Dollar Index (Ticker: USDollar) is 0.37 percent higher from the open after moving 100 percent if its average true range, and the rebound from 9,738 may gather pace over the coming days as the heighten risk of a Greek default drags on risk taking behavior. However, as 30-minute relative strength index falls back from overbought territory, we may see a small pullback in the index, and the dollar may fall back towards 9,900 before it resumes the rally from earlier this month. Indeed, the fundamental developments coming out of the world’s largest economy should fuel demands for the greenback amid the more robust recovery, and the USD may track high throughout 2012 as the Fed softens its dovish tone for monetary policy. 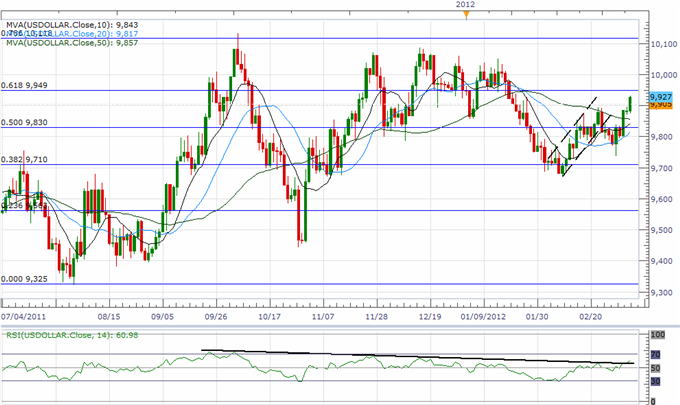 As the relative strength index finally breaks out of the downward trend, the technical development instills a bullish outlook for the USD, and the greenback looks poised to recoup the losses from the previous year as market participants scale back speculation for another round of quantitative easing. Indeed, Fed officials are sounding more upbeat this year as the recovery gathers pace, and it looks as though the FOMC will preserve a wait-and-see approach in 2012 as the outlook for growth and inflation picks up. In turn, we may see the central bank conclude its easing cycle in the second-half of the year, and Fed Chairman Ben Bernanke may lay the ground works to start normalizing monetary policy as the recovery gets on a more sustainable path. In turn, the USDOLLAR looks poised to ultimately make another run at the 78.6% Fibonacci retracement (10,118), and the bullish momentum underlining the greenback should accelerate later this year as long as the Fed continues to talk down speculation for QE3.

Three of the four components weakened against the greenback, led by a 106 percent decline in the Australian dollar, while the Japanese Yen advanced 106 percent amid the drop in carry interest. Indeed, it seems as though the short-term pullback in the USDJPY will gather pace over the remainder of the week as the RSI falls back from overbought territory, and the pair may continue to consolidate over the next 24-hours of trading as the 10-Day SMA (80.86) fails to hold up as interim support. In turn, we may see the exchange rate revert back to 80.00 to test for psychological support, but the recent selloff in the USDJPY is likely to be short-lived as the fundamental outlook for the world’s third-largest economy turns increasingly bleak.