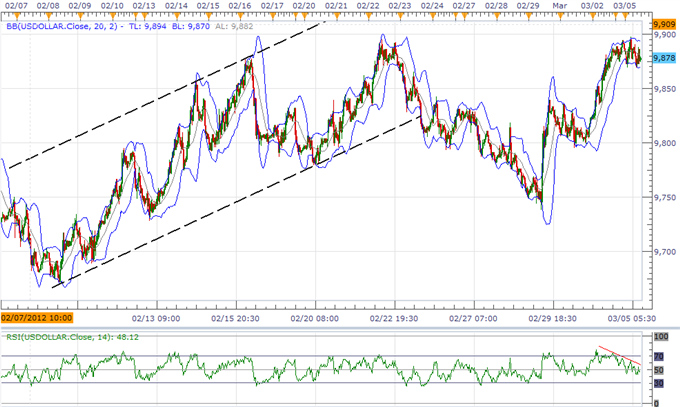 USD Index To Consolidate Ahead Of Key Event Risks, AUD At Risk On RBA

The Dow Jones-FXCM U.S. Dollar Index (Ticker: USDollar) is 0.07 percent lower from the open after giving back the overnight advance to 9,899, and the greenback may continue to pare the rebound from the previous week as market participants increase their appetite for risk. Indeed, the downward trend in the 30-minute relative strength index instills a bearish outlook for the dollar, and we may see a sharp selloff in the reserve currency as it appears to be carving out a double-top just below 9,900. However, as the fundamental outlook for the world’s largest economy continues to improve, the recent weakness in the dollar should be short-lived, and we maintain a bullish forecast for the near-term as the Federal Reserve continues to scale back its dovish tone for monetary policy. 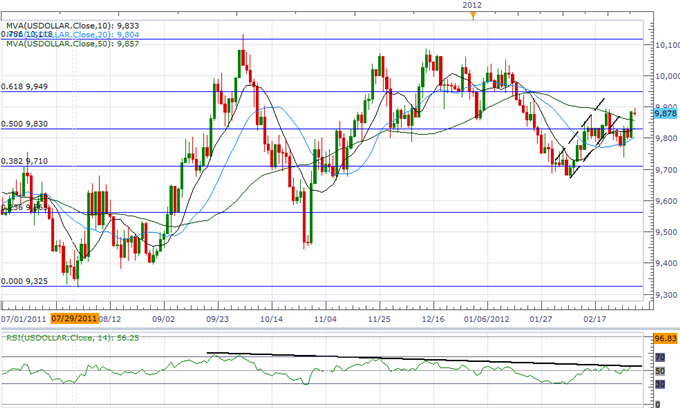 Indeed, the slew of major event risk on tap for later this week may keep the dollar within a narrow range over the next 24-hours of trading, but we will be keeping a close eye on the relative strength index as it threatens the downward trend carried over from the previous year. Should the RSI clear 60, the development would reinforce our bullish call for the USD, and we may see the dollar ultimately make another run at the 78.6 percent Fibonacci retracement around 10,118 as it carves out a higher low coming into March. Nevertheless, as the highly anticipated U.S. Non-Farm Payrolls report comes into focus, we’re expecting to see employment increase 210K in February, and the more robust recovery in the labor market could prop up the greenback as it dampens speculation for another round of quantitative easing. In turn, we should see the Federal Reserve continue to strike an improved outlook for the world’s largest economy, and the central bank may see scope to start normalizing policy towards the end of the year as growth and inflation picks up.

Three of the four components advanced against the dollar, led by a 0.47 percent advance in the Australian dollar, while the Australian dollar is struggled to hold its ground ahead of the Reserve Bank of Australia’s interest rate decision on tap for 3:30 GMT. Although the RBA is widely expected to keep the benchmark interest rate at 4.25 percent, the central bank may sound a bit more dovish as China – Australia’s largest trading partner – curbs its growth forecast for 2012, and Governor Glenn Stevens may keep the door open to lower borrowing costs further in order to encourage a stronger recovery. According to Credit Suisse overnight index swaps, market participants see the RBA lowering the cash rate by nearly 50bp over the next 12-months, but we may see interest rate expectations deteriorate this week should the central bank curb its fundamental assessment for the $1T economy. As the AUDUSD maintains the range carried over from the previous month, the policy statement accompanying the rate decision could finally produce a direction bias for the pair, and we are looking for a move to the downside as the RSI maintains the downward trend from earlier this year.