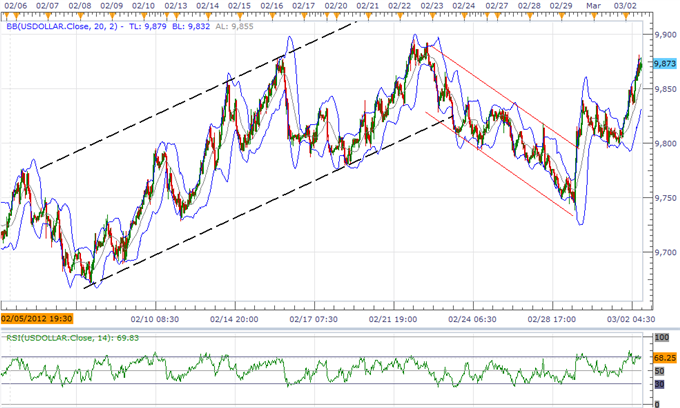 The Dow Jones-FXCM U.S. Dollar Index (Ticker: USDollar) is 0.64 percent higher from the open after moving 140 percent of its average true range, and the rebound from 9,738 may gather pace in the following week as the reserve currency benefits from safe-haven flows. As the dollar breaks out of the downward trending channel from the end of February, the shift away from risk-taking behavior should prop up the greenback, but we may see a small pullback before another advance as the 30-minute relative strength index falls back from a high of 79. Nevertheless, we may see the USD show a greater reaction to the fundamentals coming out of the world’s largest economy as the Federal Reserve continues to soften its dovish tone for monetary policy, and we may see the correction between risk and the dollar taper off in 2012 as the central bank talks down speculation for additional monetary support. 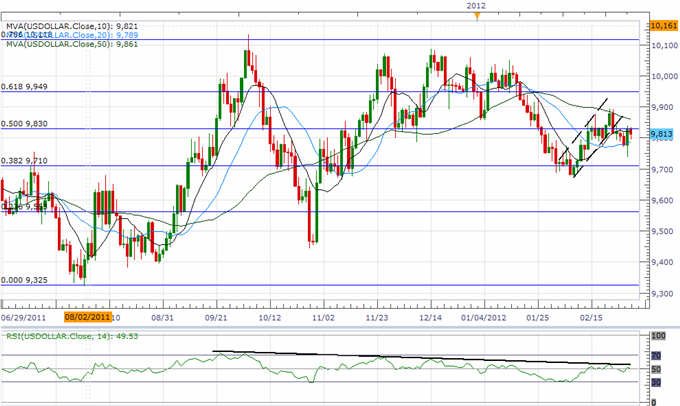 As Fed Chairman Ben Bernanke refrains from talking up another large-scale asset purchase program, easing bets for QE3 instills a bullish outlook for the USD, and the central bank may see scope to conclude its easing cycle this year as growth and inflation picks up. As we expect the FOMC to endorse a wait-and-see approach in 2012, we should see the strong tie between the USD and risk break ultimately break down, and positive developments coming out of the world’s largest economy should eventually help to prop up the reserve currency as the fundamental outlook improves. As the USDOLLAR carves out a lower high coming to March, we should see the index work its way towards the 61.8 percent Fibonacci retracement around 9,949, but we will need to keep a close eye on the relative strength index as the oscillator maintains the downward trend carried over from the previous year. We would like to see the RSI clear the trendline to strength our call for more USD strength, and we may see market participants turn increasingly bullish against the reserve currency as the economic docket for the following week is expected to highlight an more robust recovery.

The dollar advanced against all four components, led by a 0.83 percent decline in the Euro, while the British Pound halted the three-day advance as market participants scaled back their appetite for risk. As the GBPUSD searches for support, we may see the exchange rate comes up against the 38.2 percent Fib from the 2009 low to high around 1.5730-50, and the pair may track sideways next week as investors weigh the outlook for monetary policy. As the Bank of England is widely expected to maintain its current policy stance, we should see the central bank refrain from releasing a policy statement, and the pound-dollar may face range-bound prices over the near-term as market participants look forward to the meeting minutes due out on March 21. As central bank officials expect to see a stronger recovery this year, the Monetary Policy Committee may strike a neutral tone for monetary policy, and Governor Mervyn King may sound a bit more hawkish over the coming months as the rise in economic activity raises the prospects for inflation.