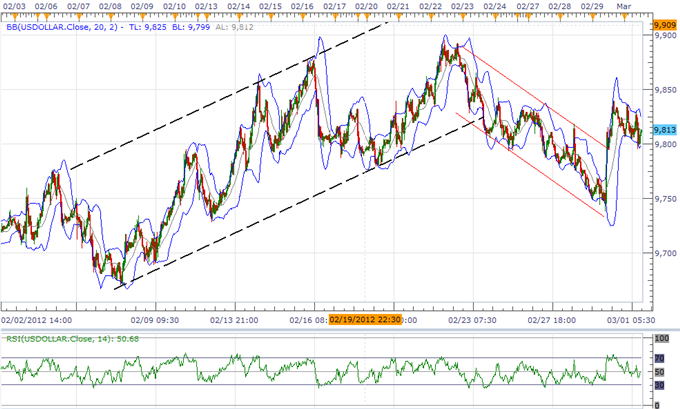 USD Weakness To Be Short-Lived, Australian Dollar To Threaten Range

The Dow Jones-FXCM U.S. Dollar Index (Ticker: USDollar) is 0.25 percent lower from the open after moving 69 percent of its average true range, and we may see the greenback consolidate further over the next 24-hours of trading as it breaks out of the downward trending channel from the previous month. However, as the index carves out a higher low, we should see the rebound from 9,738 gather pace in the coming week, and market participants may turn increasingly bullish against the USD as Fed Chairman Ben Bernanke withdraws comments support another large-scale asset purchase program. The shift in the central bank rhetoric should drive the USD higher in March, and we may see the FOMC continue to soften its dovish tone for monetary policy as growth and inflation picks up. 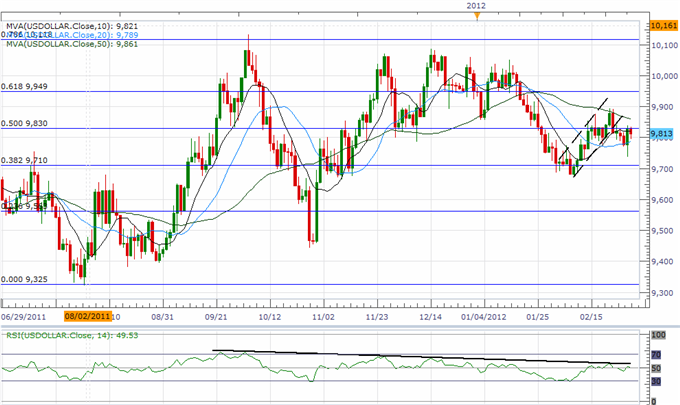 As the USDOLLAR carves out a higher low coming into March, we should see the index continue to retrace the decline from earlier this year, but the downward trend in the relative strength index continues to paint a mixed picture for the reserve currency. As the index struggles to push back above the 50.0 percent Fibonacci retracement around 9,830, the dollar looks as though it will track sideways over the near-term, but we are more bullish than bearish against the dollar as the fundamentals support a higher exchange rate. In turn, it seems as though it will only be a matter of time before we see the 50.0 percent Fib give way, and we may see the index make another run at the 78.6 percent Fib around 10,118 as market participants scale back speculation for QE3.

Three of the four components advanced against the dollar, led by a 0.60 percent in the Australian dollar, and the high-yielding currency may appreciate further over the near-term as the Reserve Bank of Australia is widely expected to keep the benchmark interest rate at 4.25 percent in March. According to Credit Suisse overnight index swaps, market participants see a 15 percent chance for a 25bp rate cut next week, and we may see the exchange rate breakout of the narrow range carried over from February should the central bank talk down expectations for lower borrowing costs. However, we may see the central bank increase its efforts to combat the slowing recovery in the $1T economy, and Governor Glenn Stevens may keep the door open to lower the cash rate further in an effort to stem the downside risks for the region. In turn, we may see the AUDUSD threaten the floor around 1.0600, and we will be keeping a close eye on the relative strength index as it continues to track lower.