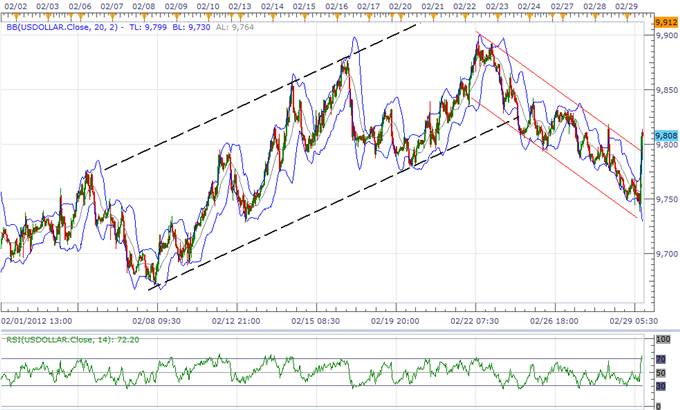 The Dow Jones-FXCM U.S. Dollar Index (Ticker: USDollar) is 0.30 percent higher from the open after moving 131 percent of its average true range, and reserve currency may continue to recoup the losses from earlier this week as it threatens the downward trending channel carried over from the previous week. As the index pares the decline to 9,738, the dollar could be carving out a higher low going into March, but we may see a short-term correction over the next 24-hours of trading as the 30-minute relative strength index approaches overbought territory. Nevertheless, as the Fed’s highly accommodative policy stance comes under scrutiny by Congress, easing bets for additional monetary support should drive the greenback higher over the medium-term.

Indeed, the House Financial Services Committee questioned the Fed’s dual mandate amid the marked expansion in the central bank’s balance sheet, and we may see the Senate Banking Committee put additional pressure on Chairman Ben Bernanke as keeping interest rate too low for too long fuels concerns of another asset bubble. As the more robust recovery raises the outlook for inflation, we should see the Fed continue to soften its dovish tone for monetary policy, and the recent reversal in the USDOLLAR looks poised to gather pace over the near-term as the fundamental outlook for the world’s largest economy improves. However, as we continue to monitor the downward trend in the relative strength index, the oscillator certain paints a mixed outlook for the reserve currency, and we may see the dollar consolidate over the near-term as market participants weigh the outlook for monetary policy.

Two of the four components weakened against the dollar, led by a 0.77 percent decline in the Euro, while the British Pound advanced 0.30 percent amid the slew of positive developments coming out of the U.K. Indeed, we may see the sterling continue to outperform against its major counterparts as Britain remains ahead of the curve in addressing its budget deficit, and the bullish sentiment underlining the GBPUSD may gather pace over the near-term as the Bank of England strikes an improved outlook for the region. As BoE officials expect to see a stronger recovery in 2012, it seems as though the central bank will endorse a wait-and-see approach throughout the first-half of the year, but the Monetary Policy Committee may see scope to conclude its easing cycle as economic activity gathers pace. As the GBPUSD finally clears the 200-Day SMA (1.5906), it seems as though the rebound from 1.5234 could spur a run at the 23.6 Fibonacci retracement from the 2009 low to high around 1.6250, but we will keep a close eye on the RSI as it approaches 70.