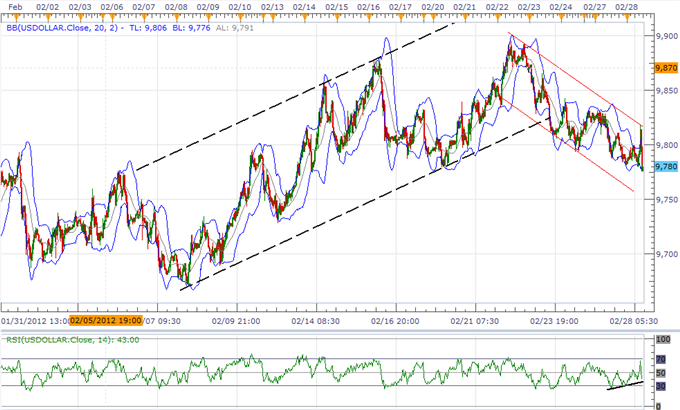 The Dow Jones-FXCM U.S. Dollar Index (Ticker: USDollar) is 0.28 percent lower from the open after moving 72 percent of its average true range, and the greenback may continue to track lower over the remainder of the week as it now appears to be trading within a downward trending channel. As the European Central Bank steps up its effort to shore up the ailing economy, the outcome of the Long Term Refinancing Operations may continue to fuel risk-taking behavior, but the technical outlook points a mixed picture for the USD as the greenback appears to be carving a lower high going into March. As there appears to be a bullish divergence in the 30-minute relative strength index, the recent weakness in the dollar may be short-lived, and we may see the reserve currency recoup the losses from earlier this month should Fed Chairman Ben Bernanke soften his dovish tone for monetary policy. 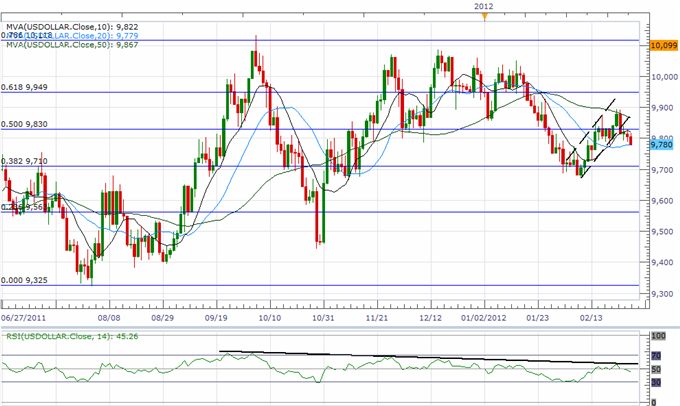 Beyond the ECB’s LTRO, Fed Chairman Bernanke is scheduled to deliver the semi-annual monetary policy report tomorrow at 15:00 GMT, and comments from the central bank head could set the tone for the USD as market participants weigh the prospects for future policy. As the private sector activity in the world’s largest economy continues to gather pace, Mr. Bernanke may see limited scope to expand the balance sheet further, and we may see the central bank head strike an improved outlook for the region as Fed officials anticipate to see a more robust recovery in 2012. At the same time, the chairman may highlight a the stickiness in underlying inflation in light of the recent rise in global commodity prices, and we may see the FOMC look to conclude its easing cycle later this year as the recovery gets on a more sustainable path. As the USDOLLAR comes up against the 20-Day SMA (9,779), the index could be carving out a higher low ahead of March, but the slew of developments coming out over the next 24-hours could produce whipsaw-like price action across the major currencies as market participants weigh the fundamental implications for the world economy.

All four components advanced against the greenback, led by a 0.43 percent rally in the Euro, and we may see the single currency may trend higher in March as the ECB’s second LTRO props up market sentiment. However, the outcome may rattle investor confidence should demands well-exceed the EUR 489B offered back in December, and we may see the commercial banks continue to horde cash as the fundamental outlook for the euro-area remains bleak. As the recovery in Europe tapers off, the ECB may have little choice but to expand its balance sheet further, and we may see a growing rift within the Governing Council as the unprecedented measures come under scrutiny. As the EURUSD remains capped by the 50.0 percent Fibonacci retracement from the 2009 high to the 2010 low around 1.3500, the pair could be carving out a near-term top going into March, and a dismal reaction to the LTRO could threaten the upward trending channel in the exchange rate as the pair remains poised for a near-term correction.