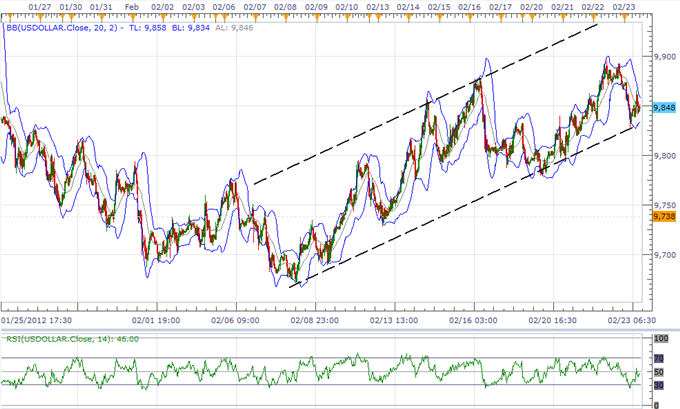 The Dow Jones-FXCM U.S. Dollar Index (Ticker: USDollar) remains 0.34 percent lower from the open after moving 109 percent of its average true range, and the greenback should continue to track higher over the next 24-hours of trading as the 30-minute relative strength index bounces back from oversold territory. Looking at the broader channel, the dollar looks poised for another move towards 9,900, and we maintain a bullish outlook for the reserve currency as the fundamental outlook for the world’s largest economy continues to improve. However, as risk trends continues to dictate price action across the financial market, the rise in market sentiment may keep the USD within a narrow range, and we may see the dollar consolidate further before making a larger move to the upside. 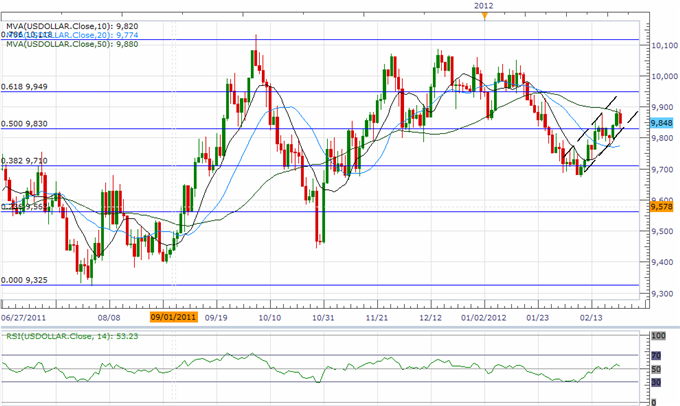 As the more robust recovery in the world’s largest economy curbs speculation for another large-scale asset purchase program, the bullish sentiment underlining the USD should continue to gather pace over the near-term as Fed officials soften their dovish tone for monetary policy. Indeed, central bank hawk Richard Fisher talked down speculation for more easing, arguing that the FOMC’s most recent policy statement was ‘talking down the economy,’ and went onto say that expectations for another round of quantitative easing is ‘wishful thinking’ as the recovery gathers pace. The less dovish stance held by the central bank should prop up the USD going forward, and the index looks poised to work its way back towards the 61.8 percent Fibonacci retracement around 9,949 as index finds intraday support around the 50.0 percent Fib around 9,830.

All four components advanced against the greenback, led by a 0.49 percent rally in the Australian dollar, but the technical outlook for the high-yielding currency instills a bearish forecast for the AUD/USD as the pair breaks out of the upward trending channel from earlier this year. As the AUD/USD struggles to hold above 1.0700, a close below the 20-Day SMA (1.0705) could pave the way for a move lower, and we may see the exchange rate fall back towards the 23.6 percent Fib from the 2010 low to the 2011 high around 1.0350-60 as it appears to carving out a top around 1.0800. However, as the aussie-dollar maintains the range from earlier this month, the exchange rate may continue to move sideways before we see a meaningful break in the exchange rate, and the pair may preserve the 200pip range going into the following week as market participation tends to thin ahead of the weekend.