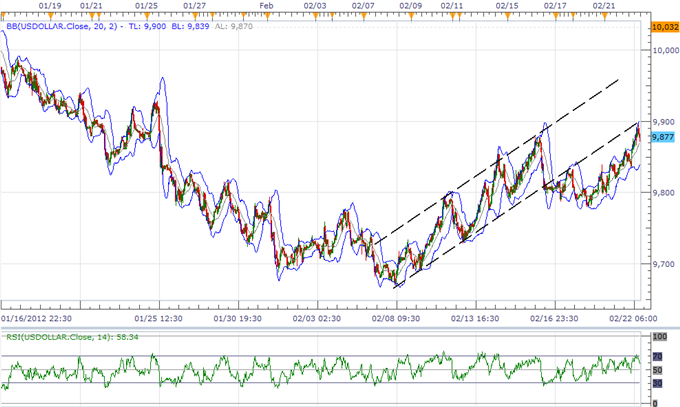 The Dow Jones-FXCM U.S. Dollar Index (Ticker: USDollar) is 0.40 percent higher from the open after moving 104 percent of its average true range, and the shift away from risk-taking behavior should prop up the reserve currency as renewed fears of a Greek default drags on trader sentiment. However, as the 30-minute relative strength index falls back from a high of 72, it looks as though there will be a short-term correction before another move to the upside, and we will be closely watching the upward trending channel from earlier this year as the index struggles to push above 9,900. In turn, the USDOLLAR may fall back towards the lower Bollinger Band (9,839) going into the end of the week, but we maintain a bullish outlook for the greenback as the recovery in the world’s largest economy continues to gather pace. 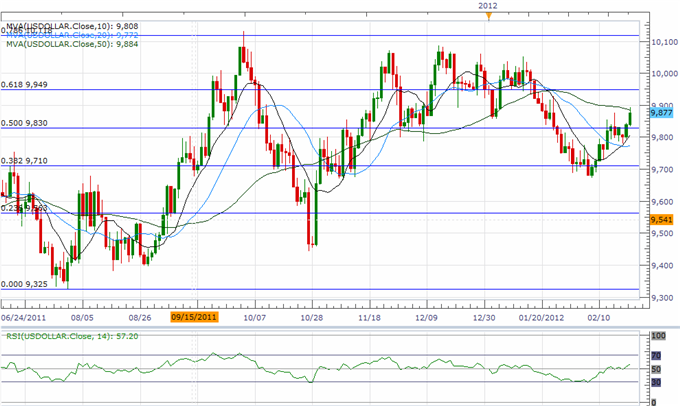 Although the existing home sales report for January struck a mixed outlook for the housing market, the more robust recovery in employment paired with the ongoing expansion in production should help to encourage a stronger recovery, and we expect the Fed to further soften its dovish tone for monetary policy as the outlook for growth and inflation improves. As we’re expecting to see a slew of positive developments coming out of the U.S. economy, the data should curb speculation for another large-scale asset purchase program, but the event risks could fuel risk-taking behavior, which would dampen the appeal of the USD. Nevertheless, we will be watching for a close above the 50-Day SMA (9,884) to reinforce our bullish forecast for the dollar, and we may see the index make another run at the 78.6 percent Fibonacci retracement (10,118) as the Fed comes closer to concluding its easing cycle.

The greenback advanced against three of its four components, led by the 0.70 percent decline in the Japanese Yen, and the bearish sentiment underlining the low-yielding currency may gather pace over the near-term as the fundamental outlook for the world’s third-largest economy deteriorates. Indeed, the widening spread between U.S. and Japanese bonds has fueled the recent rally in the USDJPY, and the pair looks poised to appreciate further during the first-half of 2012 as the Bank of Japan expands its easing cycle. As Japanese policy makers scramble to stem the risk for deflation, the BoJ may continue to ramp up its asset purchases over the coming months, but the weakening outlook for the region is likely to produce headwinds for the Yen as market participants see the central bank maintaining the highly accommodative policy for a prolonged period of time.