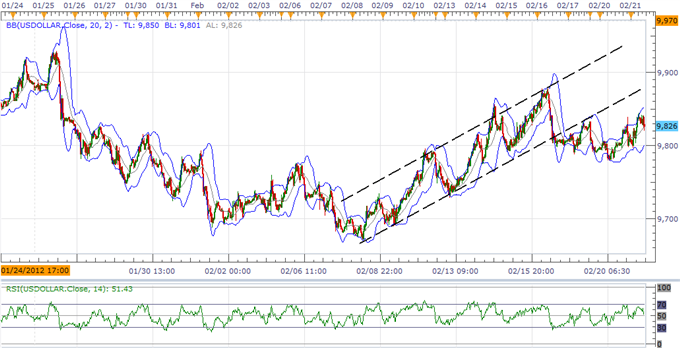 The Dow Jones-FXCM U.S. Dollar Index (Ticker: USDollar) remains 0.21 percent higher from the open after moving 79 percent of its average true range, and we may see the greenback track sideways over near-term as it breaks out of the upward trending channel from earlier this month. As the 30-minute relative strength index falls back from a high of 66, we should see the USD hold within the Bollinger Bands going into the middle of the week, but the fundamental developments coming out of the world’s largest economy may prop up the reserve currency as the more robust recovery dampens the scope for another round of quantitative easing. 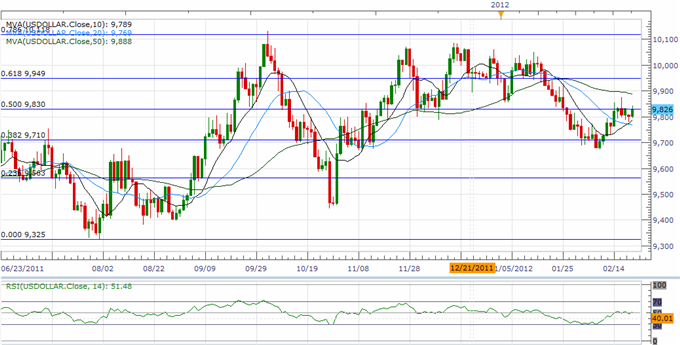 As the USDOLLAR struggles to hold above the 50.0 percent Fibonacci retracement around 9,830, the failed run at the 50-Day SMA (9,888) could produce a short-term correction in the index, and we may see the index fallback towards the 38.2 percent Fib around 9,710 as market sentiment picks up. However, as the economic docket is expected to show a more robust recovery in the U.S., we may see the greenback may extend the rebound from 9,672, and the reserve currency may continue to recoup the losses from earlier this year as the Fed has limited scope to push through another large-scale asset purchase program. In turn, the dollar index could be putting in a higher low around 9,800, and we will be looking for additional USD strength as the central bank softens its dovish tone for monetary policy.

Three of the four components weakened against the greenback, led by a 0.62 percent decline in the Australian dollar, but we may see the high-yielding currency trend higher over the next 24-hours of trading as market sentiment improves. Indeed, it looks as though currency traders are betting on a short-term reversal as the AUD/USD threatens the upward trending channel carried over from the previous year, and the pair looks to be carving out a major top in February as there appears to be a bearish divergence in the relative strength index. However, we anticipate to see higher prices should the pair continue to close above the 20-Day SMA at 1.0702, and the aussie-dollar may consolidate before we finally get a short-term correction in the exchange rate.