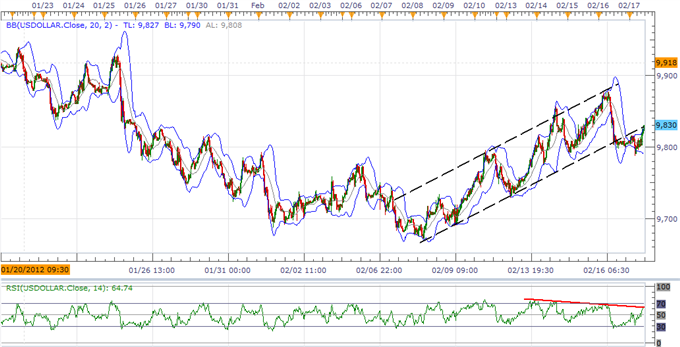 The Dow Jones-FXCM U.S. Dollar Index (Ticker: USDollar) is 0.22 percent higher from the open after retracing the overnight decline to 9,787, and the greenback may continue to track higher in the days ahead as the stickiness in inflation curbs speculation for another large-scale asset purchase program. As the fundamental outlook for the world’s largest economy improves, we expect the recent weakness in the USD to be short-lived, but the technical development points to a near-term correction as the index struggles to push above the lower bounds of the recent channel. Indeed, the bearish divergence in the 30-minute relative strength index could produce another dip in the index, but we anticipate the recent strength USD to gather pace over the near-term as growth and inflation picks up. 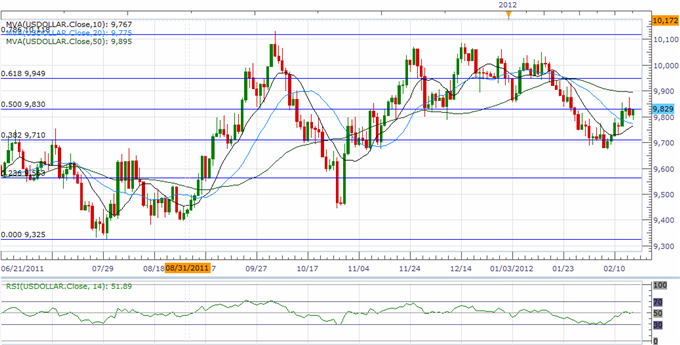 As the USDOLLAR struggles to trade back above the 50.0 Fibonacci retracement (9,830), the index may face sideways price action in the days ahead following the failed run at the 50-Day SMA (9,895), and the greenback may fall back towards the 38.2% Fib around 9,710 to test for support. However, as core consumer prices in the world’s largest economy expands at the fastest pace since September 2008, the stickiness in underlying inflation should lead the Federal Open Market Committee to soften its dovish tone for monetary policy, and the development dampens the case for additional monetary support as Fed officials anticipate to see a more robust recovery in 2012. As prospects for QE3 diminish, we will maintain a bullish outlook for the USD, and the index should continue to retrace the decline from the previous year as we see scope for the Fed to start normalizing monetary policy towards the end of the year.

Two of the four components weakened against the greenback, led by a 0.54 percent, while the Euro advanced 0.17 percent amid optimism surrounding the EU meeting scheduled for Monday. Indeed, the renewed efforts to release the second bailout package for Greece has helped to prop up the single currency, while the European Central Bank is expected to swap its Greek bond-holdings in part of the debt restructuring plan. However, the unprecedented event could set precedence for the periphery countries, and Portugal may be next in-line to receive additional assistance as the region continues to cope with high long-term funding costs. As the sovereign debt crisis remains far from being resolved, we expect the single currency to face additional headwinds over the near-term, and the rebound in the EUR/USD may be short-lived should European policy makers struggle to meet on common ground.