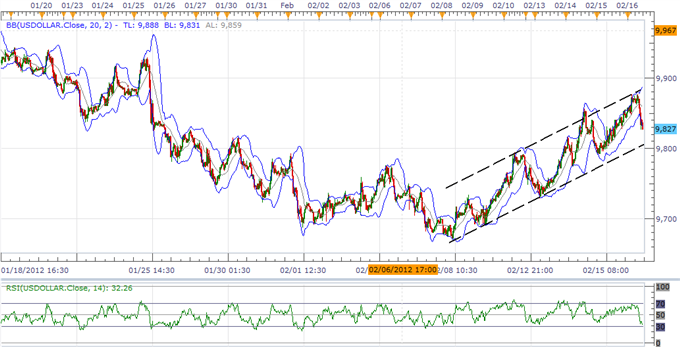 USD To Benefit From Sticky Price Growth, Sterling To Consolidate

The Dow Jones-FXCM U.S. Dollar Index (Ticker: USDollar) is 0.02 percent lower from the open after moving 73 percent of its average true range, and we may see the greenback continue to consolidate over the remainder of the week as the 30-minute relative strength index falls back from a high of 69. In turn, we may see the USD fall back towards 9,800, but the recent weakness in the index is likely to be short-lived as long as it maintains the upward trending channel carried over from the previous week. In turn, we may get a small rebound over the next 24-hours of trading, and we will continue to call for additional dollar strength as the more robust recovery in the world’s largest economy dampens the prospects for additional monetary support. 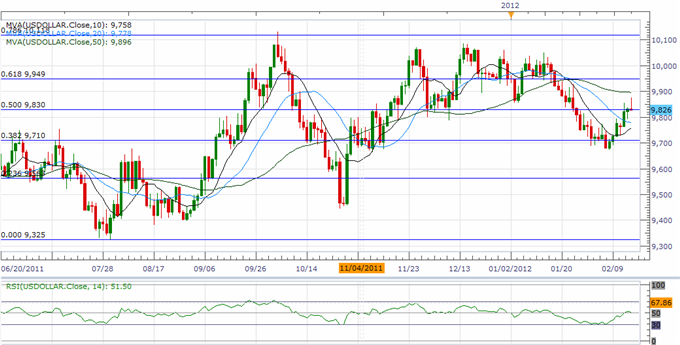 As the near-term rally fails to produce a test of the 50-Day SMA (9,896), it looks as though we will see a small pullback before another meaningful advance. Hoever, the consumer price report on tap for Friday could spark a rally in the dollar should the data raise the outlook for inflation. Although we’re expected to see the headline reading fall back to 2.8% from 3.0% in December, the core CPI is expected to hold at the highest reading since October 2008. The stickiness in core prices are likely to curb speculation for another round of quantitative easing in light of the more robust recovery, and we should see the Fed continue to soften its dovish tone for monetary policy as the outlook for growth and inflation picks up. In turn, we may see the USDOLLAR bounced back over the next 24-hours of trading, and the reserve currency may make a run towards 9,900 as the fundamental outlook improves.

Once again, three of the four components advanced against the USD, driven by a 0.45 percent rally in the British Pound, and we may see the sterling continue to outperform against its major counterparts as market participants appear to be treating U.K. assets as a safe-haven. Although Moody’s Investor Services lowered Britain’s credit rating outlook to negative, the U.K. certainly remains ahead of the curve in addressing its budget deficit, and the sterling may appreciate further over the near-term as the Bank of England softens its dovish tone for monetary policy. Even though the BoE kept the door open to expand monetary policy further, it seems as though the central bank is a little bit more upbeat towards the economy as policy makers expect to see a stronger recovery in 2012, and it seems as though the Monetary Policy Committee will revert back to a wait-and-see approach after expanding its asset purchase target to GBP 325B. In turn, the GBP/USD may continue to retrace the decline from earlier this month, but the pair may face sideways action over the remainder week should the exchange rate struggle to close above the 10-Day SMA at 1.5781.