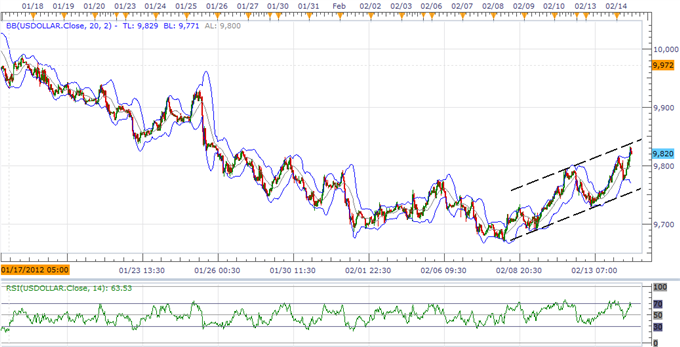 The Dow Jones-FXCM U.S. Dollar Index (Ticker: USDollar) is 0.73 percent higher from the open as market participants scaled back their appetite for risk, and the greenback should continue recoup the losses from earlier this year as it appears to forming an upward trending channel. However, as price action approaches the top of the range, with the 30-minute relative strength index pushing into overbought territory, it looks as though we will get a small pullback before the index continues to move higher. Nevertheless, as the FOMC is scheduled to release its policy meeting minutes on Wednesday, the statement is likely to heavily influence the USD, and the developments coming out of the central bank may prop up the dollar should the central bank talk down speculation for additional monetary support.

In light of recent developments coming out of the world’s largest economy, the FOMC may strike an improved outlook for the region, and the central bank may endorse a wait-and-see approach throughout the first-half of 2012 as the recovery gradually gathers pace. As Fed officials expect to see a more robust recovery in 2012, the minutes may highlight the stickiness in the core rate of inflation, and the committee may see limited scope to conduct another round of quantitative easing as monetary policy remains highly accommodative. However, as Fed Chairman Ben Bernanke preserves a cautious tone for the region, the central bank head may keep the door open to expand the balance sheet further, and a dovish statement would dampen the appeal of the reserve currency as market participants still see a chance for QE3. As the USDOLLAR struggles to hold above the 50.0 percent Fib around 9,830, the index looks poised to consolidate over the next 24-hours of trading, but the FOMC minutes should spark increased volatility in the USD as investors weigh the prospects for future policy.

All four components struggled to hold their ground on Wednesday, with the Japanese Yen tumbling 1.02 percent, and the USD/JPY may trend higher over the near-term as the fundamental outlook for the world’s third-largest economy deteriorates. Indeed, the Bank of Japan expanded its asset purchase scheme to JPY 30T in an effort to stem the risk for deflation, but the government may put increased pressure on the central bank to weaken the local currency further as it threatens to derail the economic recovery. However, it seems as though the BoJ will stick to its quantitative easing to stem the downside risks for growth and inflation, and we may see market participants scale back speculation for a currency intervention as the rebound from 7602 gathers pace. As the USD/JPY cross above the 200-Day SMA (78.06) for the first time since April, the technical developments suggest that the dollar-yen has put in a major bottom in 2011, and we may see the exchange rate continue to push higher as the long-term downward appears to be coming to an end.