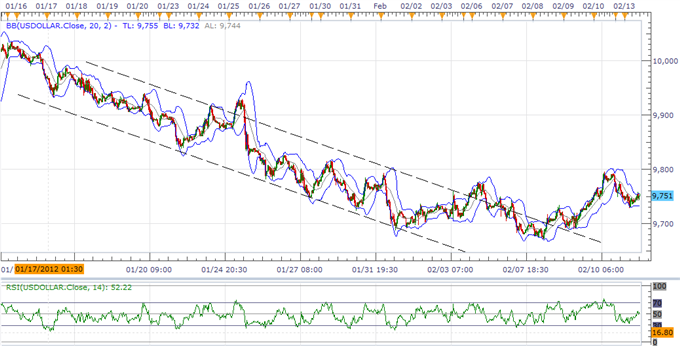 USD Weakness To Be Short-Lived, Australian Dollar Reversal On Tap

The Dow Jones-FXCM U.S. Dollar Index (Ticker: USDollar) remains 0.39 percent lower from the open after moving 73 percent of its average true range, but we should see the rebound from 9,672 gather pace as the greenback finally breaks out of the downward trending channel carried over from the previous month. As retail spending in the world’s largest economy is expected to increase another 0.8% in January, the ongoing expansion in private sector consumption should dampen expectations for additional monetary support, and we may see the FOMC soften its dovish tone for monetary policy as the recovery gradually gathers pace. In turn, the developments on tap for this week should increase the appeal of the USD, but we may see a growing rift within the committee as the pickup in growth raises the prospects for inflation. 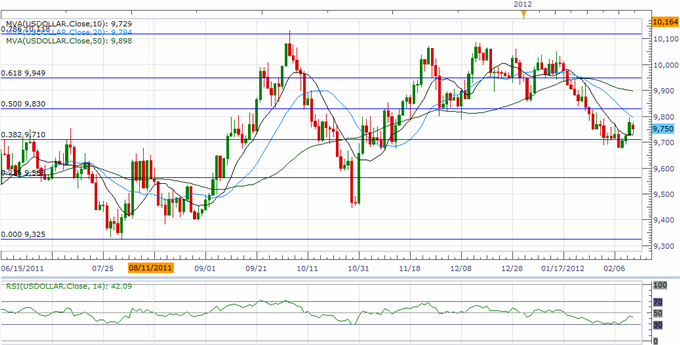 As the USDOLLAR bounces back from the 10-Day SMA (9,729), the greenback looks poised to strengthen further over the next 24-hours of trading, and we anticipate to see the index make a run at the 50.0 percent Fibonacci retracement around 9,830 following the failed test of the November low (9,665). As the FOMC is scheduled to release its policy meeting minutes later this week, the remarks could highlight an improved outlook for the U.S. economy, and we may see the central bank endorse a wait-and-see approach for the first-half of 2012 the risk of a double-dip recession subsides. However, as Fed Chairman Ben Bernanke keeps the door open to expand the balance sheet further, speculation for another round of quantitative easing could push the index sideways over the coming days, and we may see the USD consolidate further before we eventually see it retrace the decline from earlier this year.

All four components advanced against the USD on Monday, led by a 0.67 percent rally in the Australian dollar, but the AUD/USD may struggle to hold its ground should it close below the 10-Day SMA (1.0730) for the second day. As the upward trend in the aussie-dollar appears to be giving it, the pair looks poised to give back the rally carried over from the end of 2011, and we may see an aggressive move to the downside as the relative strength index finally falls back from oversold territory. In turn, we should see the exchange rate fall back to the 23.6 percent Fib from the 2010 low to the 2011 high around 1.0350-60 to test for near-term support, but the see the AUD/USD may consolidate further as the developments coming out of the euro-area props up market sentiment.