USD Index Continues To Carve Base, Japanese Yen Lags Behind

The Dow Jones-FXCM U.S. Dollar Index (Ticker: USDollar) remains 0.02 percent higher from the open after moving 65 percent of its average true range, and the greenback looks poised to strengthen further as it finally breaks out of the downward trending channel carried over from the previous month. As the upper bounds of the channel appears to be holding up as support, the rebound from 9,672 may turn into a larger reversal, and we may see the index start a broader upward trend as market participants scale back their appetite for risk. However, as finance ministers across the euro area convene in Brussels to nail out the details for Greece’s second bailout package, developments coming out of the meeting could shake up the currency market, and we may see a rebound in risk-taking behavior as the group steps up its effort to avoid a default. 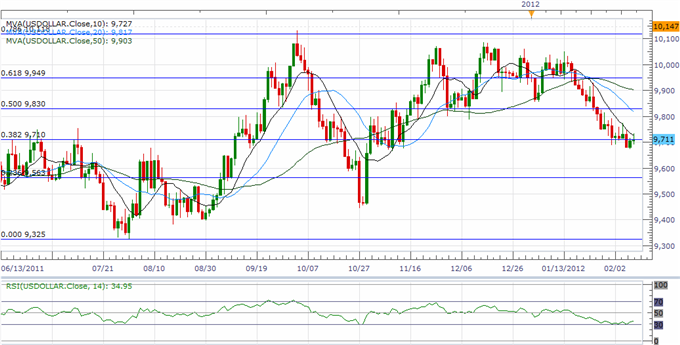 Although the USDOLLAR appears to be carving out a bottom this week, we would need to see a close above the 10-Day SMA (9,727) to strengthen the case for more dollar strength. Nevertheless, the rebound in the relative strength index suggests that the USD has indeed found a floor in February and the greenback may push higher over the next 24-hours of trading as the agreement reached by Greek policy makers comes under scrutiny. As the EU meeting takes center stage, there’s still many unanswered questions that will need to be addressed in the coming days, but it seems as though the group is struggling to meet on common ground as European policy makers see little chance of striking a deal until the Greek government passes the new austerity measures. As market optimism fizzles, the shift in trader sentiment should prop up the USD, but we may see the index continue to consolidate over the remainder of the week as investors continue to monitor the developments coming out of the euro-area.

Three of the four components advanced against the greenback, led by a 0.24 percent rally in the Euro, while the Japanese Yen lagged behind its major counterparts, with the USD/JPY falling 0.52 percent from the open. As the exchange rate continues to retrace the decline from earlier this year, there’s certainly little in the way of seeing a currency intervention, and the pair looks poised to make a run at the 23.6% Fib from the 2011 high to low around 77.80-78.00 as it carves out a near-term bottom ahead of 76.00. However, as the economic docket for the following week is expected to show Japan contracting an annualized 1.4% in the fourth-quarter, the weakening outlook for growth and inflation may put additional pressure on the Bank of Japan to shore up the ailing economy, and the government may renew calls for an intervention as the marked appreciation in the local currency drags on the recovery.