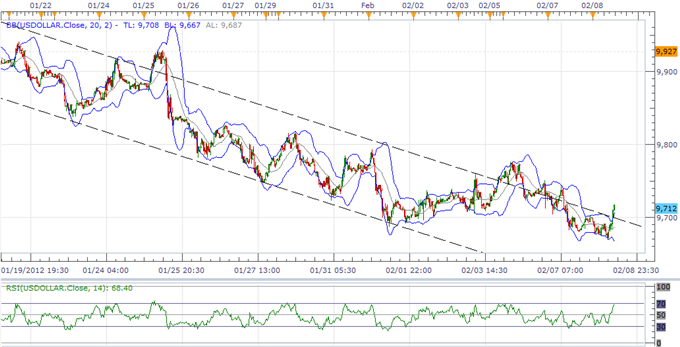 The Dow Jones-FXCM U.S. Dollar Index (Ticker: USDollar) is 0.28 percent higher from the open after moving 64 percent of its average true range, and the rebound from 9,672 should pick up over the next 24-hours of trading as it threatens the downward trending channel carried over from the previous month. As risk sentiment falters, the shift away from risk-taking behavior should prop up the USD, but we may see the reserve currency consolidate during the remainder of the day as the relative strength index approaches overbought territory. In turn, we could be seeing another false breakout in the index, but the flight to safety may gather pace on Thursday as we expect the Bank of England and the European Central Bank to strike a cautious outlook for their respective economies. 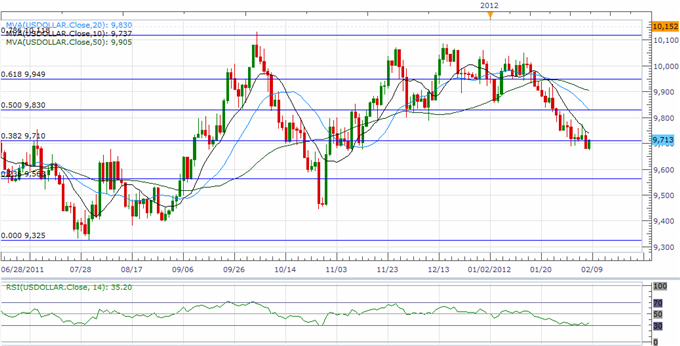 As the USD climbs back above the 38.2% Fibonacci retracement (9,710), with the relative strength index holding above oversold territory, there’s a chance of seeing the short-term rebound turn into a larger correction. However, we would like to see the index break and close above the 10-Day SMA (9,738) to favor more dollar strength, and we will be closely watching the former support around 50.0 percent Fib around 9,830, which could play as new resistance. Nevertheless, market volatility may taper off during the overnight session as the European Central Bank interest rate decision comes into focus, but the policy statement may rattle investor confidence as we expect President Mario Draghi to maintain a dovish tone for monetary policy. As the euro-area slips back into recession, the Governing Council may see scope to push the benchmark interest rate below 1.00%, and the central bank may carry its easing cycle into the second-half of 2012 as subdued growth dampens the outlook for inflation. Should the ECB talk up speculation for additional monetary support, the weakening fundamentals for the euro-area could fuel the flight to safety, and the USDOLLAR looks poised to reverse course over the remainder of the month as it appears to be breaking out of the downward trend.

All four components weakened against the greenback on Wednesday, led by a 0.55 percent decline in the British Pound, and the sterling may track lower over the next 24-hours of trading as the Bank of England is widely expected to expand its asset purchase program beyond the GBP 275B target. As the GBP/USD makes another failed run at the 200-Day SMA (1.5944), the pullback in the relative strength index instills a bearish outlook for the sterling, and we may see the exchange rate come up against the 38.2 percent Fib from the 2009 low to high around 1.5730-50 should the Monetary Policy Committee see scope to expand its balance sheet further later this year. As the BoE continues to see a risk of undershooting the 2% target for inflation, we should see Governor Mervyn King maintain a dovish outlook for monetary policy, but the central bank head may keep the door open to take additional steps to shore up the ailing economy as the U.K. faces an increased risk of facing a double-dip recession.