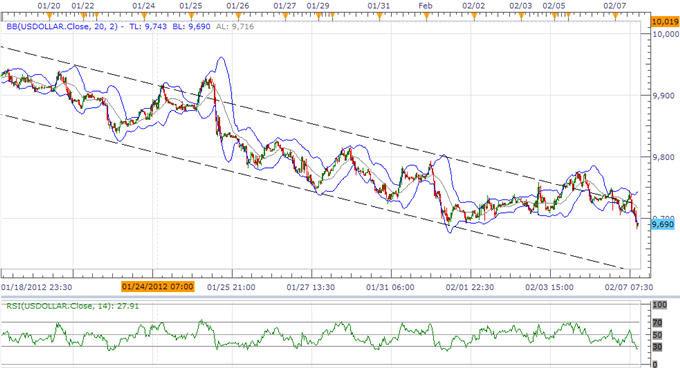 The Dow Jones-FXCM U.S. Dollar Index (Ticker: USDollar) is 0.42 percent lower from the open after moving 93 percent of its average true range, and the greenback may weaken further during the North American trade as it slips back into the downward trending channel carried over from the previous month. As the USD remains at a critical juncture, a close below 9,700 could heighten the bearish sentiment underlining the dollar, and we will be keeping a close eye on the 30-minute relative strength index as it dips into oversold territory. However, as Fed Chairman Ben Bernanke maintains a cautious outlook for the world’s largest economy, the dovish tone held by the central bank head may continue to dampen the appeal of the reserve currency, and Mr. Bernanke may see scope to further expand the balance sheet in order to encourage a stronger recovery. 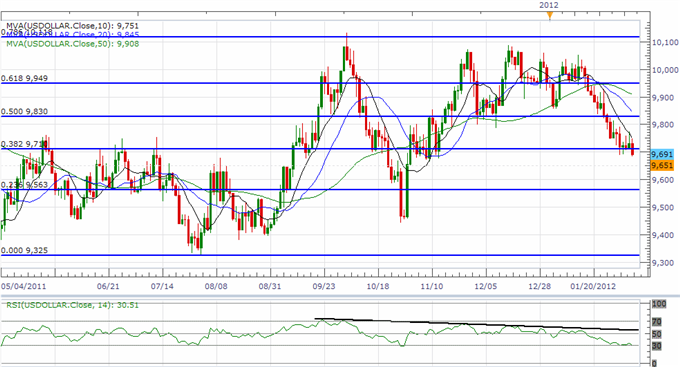 Despite the more robust recovery, Fed Chairman Bernanke continued to talk down the risk for inflation, and the central bank head looks poised to keep the door open for additional monetary support as the fundamental outlook remains clouded with high uncertainty. In turn, we may see the USD threaten the November low at 9,665, but the relative strength index points to a near-term correction as it holds above 30. At the same time, we would need to see the dollar break and close above the 10-Day SMA (9,750) to strength the case for a short-term reversal, but the reserve currency may continue to give back the sharp rebound from the previous year as the rise in risk-taking behavior gathers pace. Should we see the November low (9,665) give out, another leg lower would expose the 23.6 percent Fibonacci retracement around 9,563, and the greenback may face additional headwinds over the near-term as Fed Chairman Bernanke talks up speculation for QE3.

Three of the four components advanced against the greenback, led by a 0.88 rally in the Euro, and the single currency may continue to recoup the losses from the end of 2011 as European policy makers step up their effort to address the sovereign debt crisis. Indeed, there’s rumors that Greek is coming up with a final draft for its second bailout package after the government pledged to cut 15K public sector jobs, but the slew of austerity measures dampens the outlook for the euro-area as the region slips back into recession. As European policy makers try to balance public finances, the lack of fiscal support is likely to exacerbate the slowdown in economic activity, and the region may face a deep contraction in 2012 as the debt crisis continues to drag on the real economy. In turn, the European Central Bank may show an increased willingness to push the benchmark interest rate below 1.00%, and President Mario Draghi may carry the easing cycle into the second-half of the year as the economic downturn dampens the outlook for inflation. Although the EUR/USD advanced to a fresh yearly high of 1.3269, the weakening outlook for the euro-area continues to instill a bearish outlook for the single currency, and the near-term rally should taper off later this week as we expect the ECB to maintain a dovish tone for monetary policy.