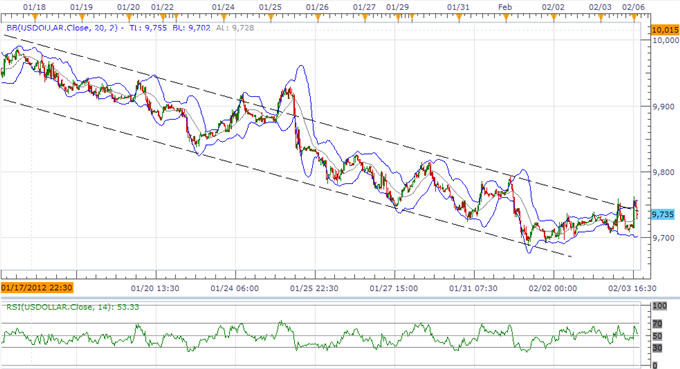 The Dow Jones-FXCM U.S. Dollar Index (Ticker: USDollar) remains 0.19 percent higher from the open after moving 76 percent of its average true range, and the greenback certainly appears to have carved a floor around 9,700 as it threatens to break out of the downward trending channel carried over from the previous month. As the economic docket remains fairly light throughout the North American trade, we should see risk sentiment continue to dictate price action for the major currencies, and the rebound from 9,687 should gather pace as the ongoing turmoil in Europe drags on investor confidence. However, as the 30-minute relative strength index approaches overbought territory, we may see the USD consolidate before it makes another run to the upside, and market participants may turn increasingly bullish against the dollar as the Federal Reserve talks down speculation for additional monetary support. 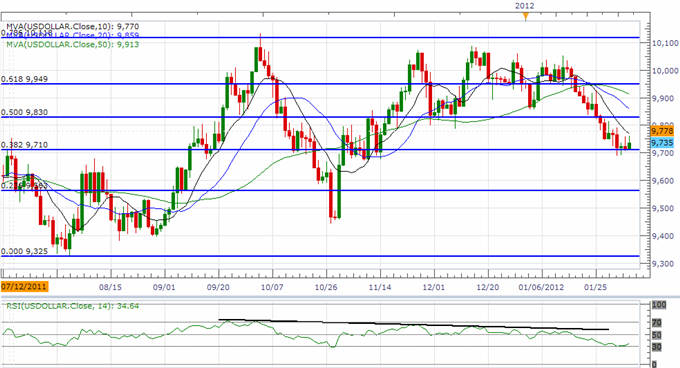 Indeed, St. Louis Fed President James Bullard highlighted the risks of keeping interest rates too low for too long, noting that it ‘punishes savers in the economy,’ and went onto say that the more robust recovery dampens the prospects for another round quantitative easing as inflation is ‘up sharply’ from the second-half of the previous year. As Fed officials soften their dovish tone for monetary policy, it seems as though the FOMC will maintain a wait-and-see approach throughout the first-half of 2012, and the central bank may drop its pledge to retain the zero interest rate policy well into 2014 as the fundamental outlook for the world’s largest economy improves. As the USDOLLAR finds support around the 38.2 percent Fibonacci retracement (9,710), with the relative strength index coming off of oversold territory, we should see the pair work its way back towards the 50.0 percent Fib around 9,830, but Fed Chairman Ben Bernanke may talk down the dollar as he’s scheduled to testify in front of the Senate Budget Committee later this week. In turn, we may see the USD track sideways in the days ahead, but we maintain a bullish outlook for the greenback as prospects for QE3 diminish.

Two of the four components weakened against the greenback on Monday, led by a 0.37 percent decline in the Euro, while the Australian dollar shed 0.33 percent as market participants scaled back their appetite for risk. Indeed, the AUD/USD may weaken further over the next 24-hours of trading as the Reserve Bank of Australia is widely expected to lower the benchmark interest rate by another 25bp in February, and we may see a sharp reversal in the exchange rate should the central bank talk up speculation for additional monetary support. As the RBA maintains a cautious outlook for the region, Governor Glenn Stevens may continue to highlight the risks surrounding the $1T economy, and the central bank head may see scope to lower the cash rate further in 2012 as the slowing recovery dampens the outlook for inflation. As the rally in the AUD/USD fails to produce a break of 1.0800, the pair may have set a lower top last week, and we will watch for a break and a close below the 10-Day SMA (1.0647) to provide conviction for a short trade.