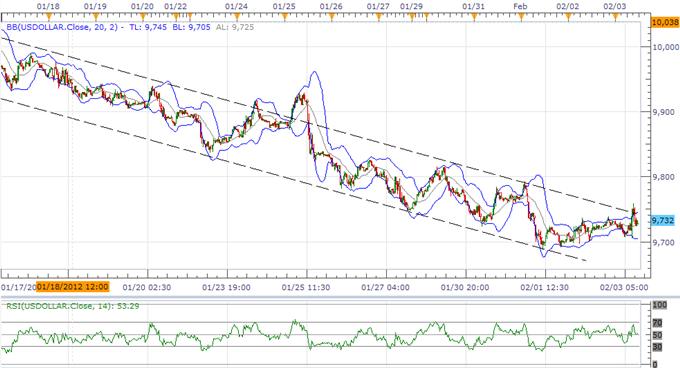 The Dow Jones-FXCM U.S. Dollar Index (Ticker: USDollar) remains 0.08 percent higher from the open after moving 74 percent of its average true range, and the greenback looks poised to break out of the downward trending channel carried over from the previous month as it finds support around 9,700. As the fundamental outlook for the world’s largest economy improves, easing bets for another large-scale asset program should prop up the USD, and the rebound may turn into a larger correction as we expect to see a more robust recovery in 2012. However, it looks as though the greenback will consolidate going into the weekend as the 30-minute relative strength index back from a high of 67, and we will maintain a bullish outlook for the near-term as the index carves out a bottom this week. 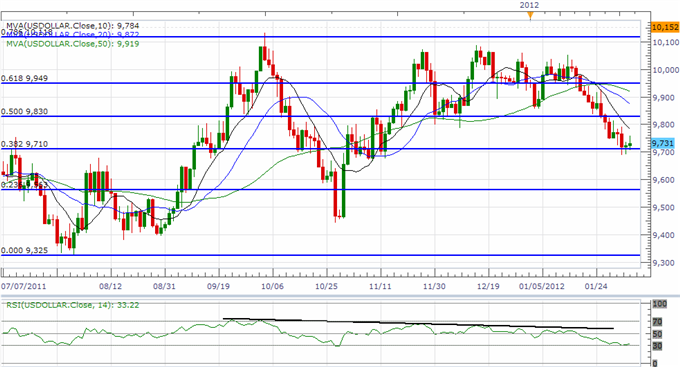 Although Non-Farm Payrolls exceeded market expectations, we saw the unemployment rate unexpectedly weaken to 8.3% from 8.5% as discouraged workers continued to leave the labor force. As FOMC officials remain concerned about the protracted recover in employment, the committee may keep the door open to further expand its balance sheet, and Chairman Ben Bernanke may continue to strike a cautious outlook for the region as the central bank head scheduled to testify in front of the Senate Budget Committee next week. In turn, dovish comments from Mr. Bernanke may dampen the appeal of the USD, but the technical outlook points to a stronger dollar as the index continues to close above the 38.2 percent Fibonacci retracement around 9,710, while the relative strength index bounces back from a low of 30. As the dollar carves out a bottom in February, the index looks poised to retaken the sharp decline carried over from the previous month, but we may see former support around the 61.8 percent Fib (9,949) act as new resistance.

Three of the four components weakened against the USD, led by a 0.40 percent decline in the Japanese Yen, while the Australian dollar advanced 0.51 percent following a rise in risk-taking behavior. However, as the AUD/USD struggles to clear 1.0800, the pair appears to be forming a triple-top, and we may see a major reversal in the week ahead as the Reserve Bank of Australia is widely expected to lower the benchmark interest rate by another 25bp in February. However, we will be closely watching the policy statement as we expect RBA Governor Glenn Stevens to maintain a dovish tone for monetary policy, and the central bank head may see scope to lower borrowing costs further in 2012 as the slowing recovery dampens the outlook for inflation. However, we would like to see a break and close below the 10-Day SMA (1.0626) to favor a short AUD/USD trade, and we may see the exchange rate fall back towards the 23.6 percent Fib from the 2010 low to the 2011 high around 1.0350-60 to test for near-term support.