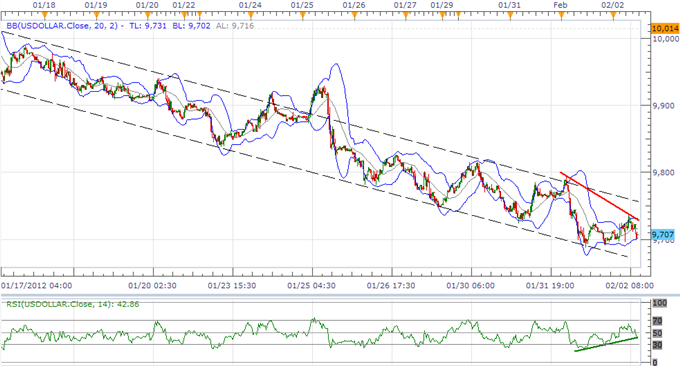 The Dow Jones-FXCM U.S. Dollar Index (Ticker: USDollar) is 0.15 percent lower from the open after moving 63 percent of its average true range, and the greenback may continue to push lower ahead of the highly anticipated Non-Farm Payrolls report as it continues to trade within the downward trending channel carried over from the previous month. However, as the world’s largest economy is expected to add another 145K jobs in January, the ongoing improvement in the labor market should help to increase the appeal of the USD, and index could be putting in a short-term bottom around 9,700 as there appears to be a bullish divergence in the 30-minute relative strength index. 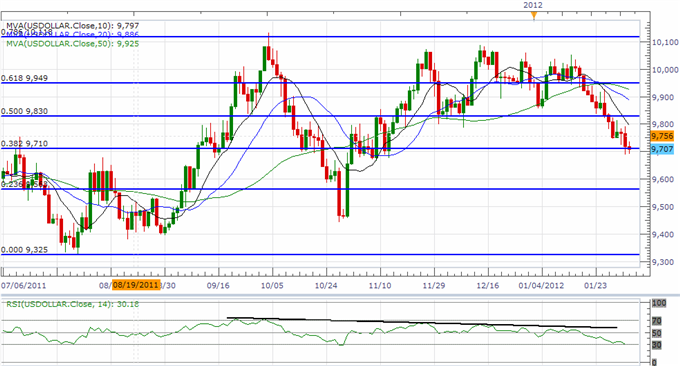 Indeed, Fed Chairman Ben Bernanke maintained a cautious outlook for the world’s largest economy amid tight credit conditions paired with the protracted recovery in the labor market, while the central bank head expectations inflation to stay subdued in light of the ongoing slack within the private sector. Nevertheless, U.S. policy makers spoke out against the zero interest rate policy, stating that the very accommodative stance curbs incentives to save while raising the risk for another asset bubble, and the central bank may come under increased scrutiny should the FOMC look to expand its balance sheet further. In light of the recent developments, it looks as though the Fed will maintain a wait-and-see approach throughout 2012, and we should see the central bank soften its dovish tone for monetary policy as the more robust recovery dampens the risk of a double-dip recession. Nevertheless, we expect to see a rebound in the USD as long as the relative strength index holds above 30, and the non-farm payrolls report on tap for Friday could serve as a catalyst to strengthen the dollar as it raises the outlook for growth and inflation.

The U.S. dollar continued to weaken against its major counterparts, led by a 0.21 percent in the Australian dollar, while the Japanese Yen continued to gain ground despite speculation for a currency intervention. Indeed, the DailyFX Speculative Sentiment index for the USD/JPY advanced to 16.89 as the retail trading crowd sees Japanese policy makers increasing their effort to stem the recent appreciation in the local currency, but it seems as though the Bank of Japan will continue to sit on the sidelines as the central bank wants more time to assess the potential impact to the real economy. As the USD/JPY fails to break below 76.00, the risk of seeing an intervention has certainly diminish, and we should see a near-term correction in the exchange rate as the relative strength index holds above oversold territory.