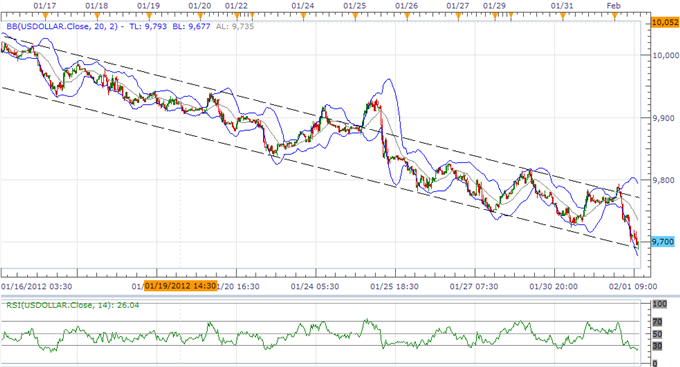 The Dow Jones-FXCM U.S. Dollar Index (Ticker: USDollar) is 0.76 percent lower from the open after moving 140 percent of its average true range, and recent weakness in the greenback may gather pace over the remainder of the week as the reserve currency continues to trade within a downward trending channel. As market participants ramp up their appetite for risk, currency traders may continue to move away from the USD, but we should see a short-term rebound going into the end of the week as long as the index holds trendline support. As the recent decline remains heavily oversold, we will need to wait for the 30-minute relative strength index to push back above 30 to see a rebound materialize, but the currency market may face increased volatility on Thursday as Fed Chairman Ben Bernanke is scheduled to testify in front of Congress at 15:00 GMT. 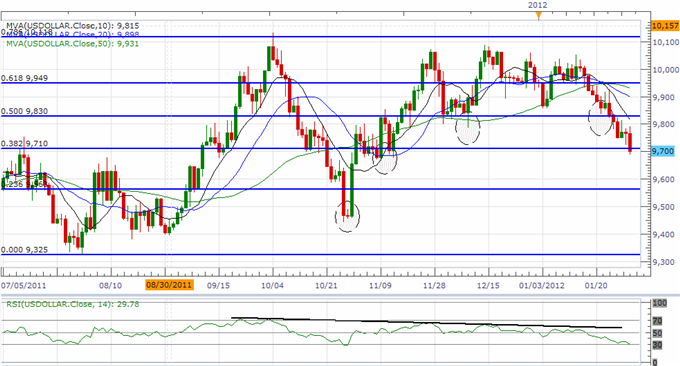 Indeed, the USDOLLAR broke key support around the 38.2 percent Fibonacci retracement around 9,710, the greenback looks poised to retrace the rebound from the end of October, but we will be keeping a close eye on the relative strength index for confirmation. As the bearish divergence in the RSI continues to pan out, we may see the oscillator continue to push into oversold territory, and the bearish momentum underlining the USD could open the door for a test of the 23.6 percent Fib as it searches for support. As the Henry Hawkins testimony comes into focus, we expect Fed Chairman Ben Bernanke to reiterate the policy statement from the previous month, and the central bank head may keep the door open to expand monetary policy further. However, in order to see a major USD reversal, we would need Chairman Bernanke to soften his dovish tone for monetary policy and strike a balanced view for the world’s largest economy as market participants maintain bets for another large-scale asset purchase program.

The U.S. dollar weakened across the board, led by a 1.00 percent advance in the Australian dollar, and the high-yielding currency may continue outperform against its major counterparts as the rise in risk-taking behavior gathers pace. Although the AUD/USD remains overbought, the pair looks poised to track higher as long as price action holds above the 10-Day SMA at 1.0572. However, as the aussie-dollar struggles to clear the October high (1.0752), the pair could be carving a triple top in February, and we expect to see Australian dollar weakness over the near to medium term as the fundamental outlook for the $1T economy deteriorates. As the Reserve Bank of Australia maintains a dovish tone for monetary policy, market participants are still looking for a 100bp worth of rate cuts in 2012 according to Credit Suisse overnight index swaps, and expectations for lower borrowing costs are likely to materialize over the near-term as the slowing recovery dampens the outlook for growth and inflation.