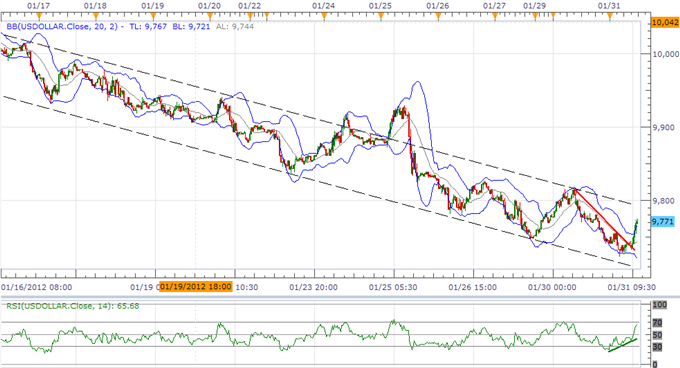 The Dow Jones-FXCM U.S. Dollar Index (Ticker: USDollar) remains 0.06 percent lower from the open after moving 80 percent of its average true range, and we may see the downward trending channel give way as the bullish divergence in the 30-minute relative strength index pans out. In turn, we should see the index threaten the upper bound of the downward trending channel, and a push above 9,800 could pave the way for a near-term rally as risk sentiment falters. However, as Fed Chairman Ben Bernanke is scheduled to testify in front of Congress later this week, market volatility may thin ahead of the Henry Hawkins testimony, and the central bank head may dampen the appeal of the greenback should Mr. Bernanke talk up speculation for another round of quantitative easing. 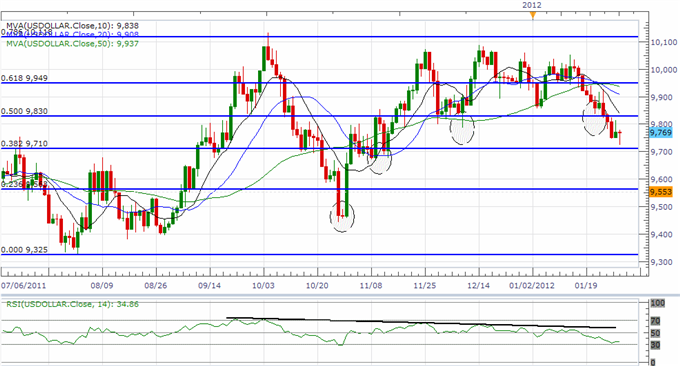 As the relative strength index bounces back from a low of 32, it seems as though the 38.2 percent Fibonacci retracement around 9,710 will act as support, and we should see the USDOLLAR recoup the losses from earlier this month as we expect the shift away from risk-taking behavior to gather pace over the near-term. In turn, the greenback may have put in a short-term bottom ahead of February, but we may see former support around the 50.0 percent Fib (9,830) play as resistance should Fed Chairman Bernanke see scope to expand the balance sheet further. Indeed, we expect the central bank head to highlight the ongoing weakness in the real economy as he keeps the door open to expand monetary policy further, and dovish comments from Mr. Bernanke could dampen the appeal of the USD as market participants retain bets for another round of quantitative easing. Should speculation for QE3 gather pace, the developments could threaten the 38.2 percent Fib (9,710), which would open the door of seeing the dollar fall back towards the 23.6 percent Fib around 9,563.

Three of the four components advanced against the greenback, led by a 0.36 percent rally in the British Pound, while the Euro struggled to hold its ground as the Greek impasse heightens the risk for a default. Indeed, the Greek PSI talks could set precedence for Portugal as the region faces with record-high financing costs, and we may see the European Central Bank encourage the financial sector to take advantage of the three-year loan facility on tap for February as the fundamental outlook for the region turns increasingly bleak. However, we may see ECB President Mario Draghi push the benchmark interest rate below 1.00% in the first-half of the year as the region braces for a recession, but we may see a growing rift within the Governing Council as the ballooning balance sheet comes under scrutiny. As the near-term rally in the EUR/USD fails to produce a break above 1.3250, the pair may have carved out a near-term top in January, and we may see the exchange rate come up against the 23.6 percent Fib retracement from the 2009 high to the 2010 low around 1.2630-50 as the mounting risk for contagion continues to drag on investor confidence.