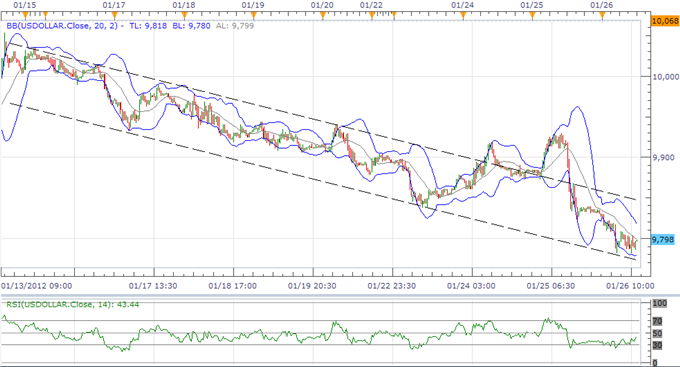 The Dow Jones-FXCM U.S. Dollar Index (Ticker: USDollar) remains 0.33 percent lower from the open after moving a whopping 201 of its average true range, and the greenback looks poised for a short-term correction as it finds trendline support. As the 30-minute relative strength index bounces back from oversold territory, we expect the USD to push higher going into the end of the week, and the dollar should work its way back towards the upper bound of the downward trending channel around 9,850. However, as the economic docket is expected to show the U.S. expanding at a faster pace during the last three-months of 2011, the advanced 4Q GDP report could prop up the dollar, and the reserve currency should regain its footing over the near-term as the developments coming out of the world’s largest economy dampens the scope for another large-scale asset purchase program. 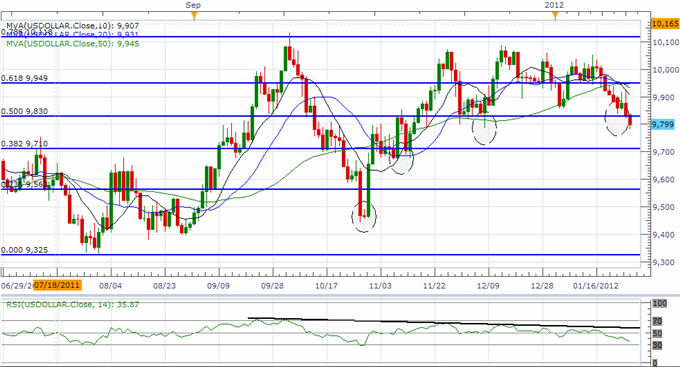 As the USDOLLAR clears the December low (9,786), the move lower negates our view for a higher high, and we may see the greenback continue to retrace the advance from November as the bearish RSI divergence continues to pan out. In turn, the index may fall back towards the 38.2 Fib around 9,710 to test for support, but an above-forecast GDP print could pave the way for a near-term correction as the more robust recovery limits the Fed’s scope to further expand its balance sheet. Looking back at the FOMC’s policy statement, it seems as though the committee resorted to extending its zero interest rate policy (ZIRP) rather than pushing for more quantitative easing, and we expect the central bank to maintain a wait-and-see approach in 2012 as the recent developments raises the outlook for growth and inflation. As a result, the USD may continue to track sideways over the near-term, but we see a greater case for a stronger dollar as the risk of a double-dip recession subsides.

The greenback weakened against all four components on Thursday, led by the 0.46 percent rally in the Australian dollar, but the high-yielding currency may struggle to hold its ground as market participants scale back their appetite for risk. As the AUD/USD fails to test the October high (1.0752), we expect to see a correction once the RSI falls back below 70, but the high-yielding currency remains at risk for a large move to the downside as the Reserve Bank of Australia is widely expected to ease monetary policy further in 2012. Although Australia’s core rate of inflation unexpectedly tipped higher during the third-quarter, Credit Suisse overnight index swaps continues to reflect market expectations for a 100bp worth of rate cuts over the next 12-months, and weakening outlook for the $1T economy instills a bearish outlook for the Australian dollar as policy makers try to ward off the slowing recovery.