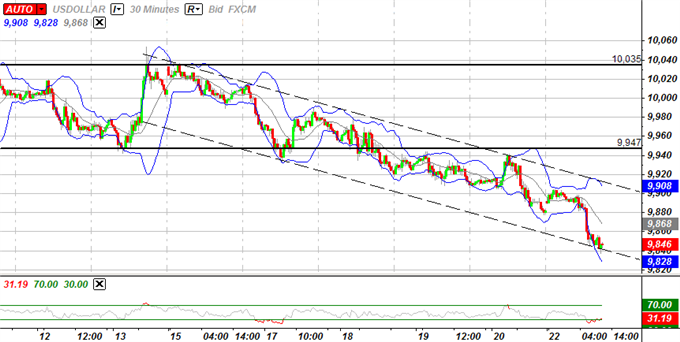 The Dow Jones-FXCM U.S. Dollar Index (Ticker: USDollar) remains 0.38 percent lower from the open after moving 102 percent of its average true range, and we may see the greenback depreciate further over the near-term as the index remains stuck within a downward trending channel. However, as the recent decline remains oversold, with price action holding along the lower bounds of its recent range, the technical developments point to a short-term correction as the dollar comes up against support (9,820-50). In turn, we should see the greenback work its way back towards 9,900, but former support around 9,974 may play as new resistance as market sentiment increase their appetite for risk. Nevertheless, as the Federal Open Market Committee interest rate decision comes into focus, we may see the USD consolidate ahead of the highly anticipated meeting, but the developments could spur a bullish reaction in the greenback as we expect the central bank to soften its dovish outlook for monetary policy. 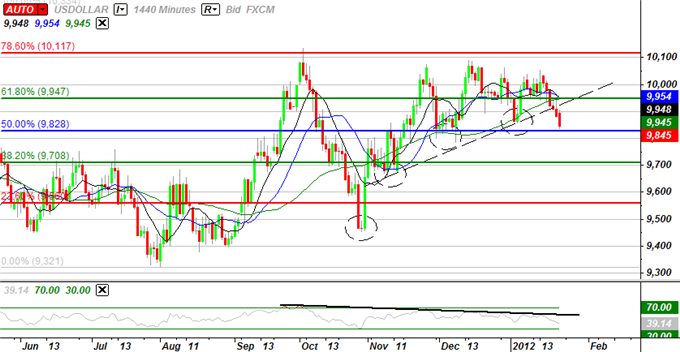 As the USDOLLAR pares the overnight decline to 9,837, the lack of momentum to push through the 50.0 percent Fibonacci retracement around 9,828 sets the stage for a near-term correction, and rebound may gather pace in the days ahead should the FOMC talk down speculation for another round of quantitative easing. Indeed, the more robust recovery in the world’s largest economy limits the Fed’s scope to push through QE3, and we may see the central bank ramp up its fundamental assessment for the region as private sector activity gathers pace. In turn, less dovish remarks from the committee should prop up the reserve currency, and the greenback may continue to recoup the losses from earlier this month as the fundamental outlook for the U.S. improves. However, as the sovereign debt crisis continues to bear down on the global financial system, Fed Chairman Ben Bernanke may keep the door expand monetary policy further, and the central bank head may continue to highlight the ongoing slack within the real economy as the central bank aims to balance the risks surrounding the region.

Three of the four components continued to gain ground against the USD, led by a 0.82 percent advance in the Euro, and the single currency may appreciate further over the next 24-hours of trading as European policy makers step up their efforts to address the sovereign debt crisis. As optimism surrounding the EU meeting in Brussels props up the single currency, the EUR/USD may continue to retrace the decline from earlier this month, but the rebound in the exchange rate may taper off should the group of finance ministers struggle to meet on common ground. As we expect the 38.2 percent Fib from the 2009 high to the 2010 low around 1.3100 to hold up as resistance, the recent rally in the euro-dollar should taper off in the coming days, and we maintain a bearish outlook for the exchange rate as the fundamental outlook for Europe remains bleak.