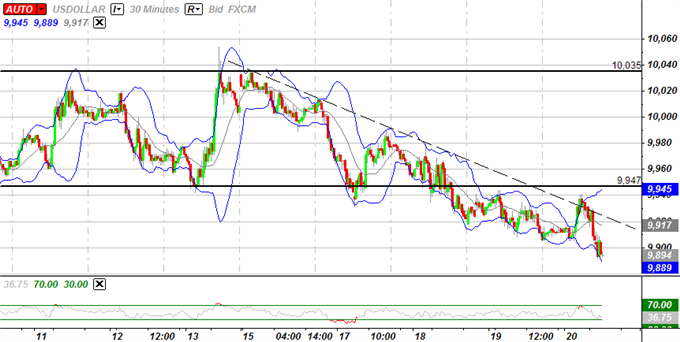 The Dow Jones-FXCM U.S. Dollar Index (Ticker: USDollar) is 0.20 percent lower from the open after moving 73 percent of its average true range, and the reserve currency may continue to track lower as it maintains the downward trend from earlier this week. As market sentiment improves, the rise in risk-taking behavior continue to dampen the appeal of the reserve currency, but the rebound from 9,892 may gather pace during the North American trade as the 30-minute relative strength index bounces back from a low of 31. As the FOMC interest rate decision comes into focus, the policy statement is likely to spark increased volatility in the exchange rate, and the less dovish comments from the Fed could spark a sharp rebound in the USD as currency traders scale back expectations for another large-scale asset purchase program. 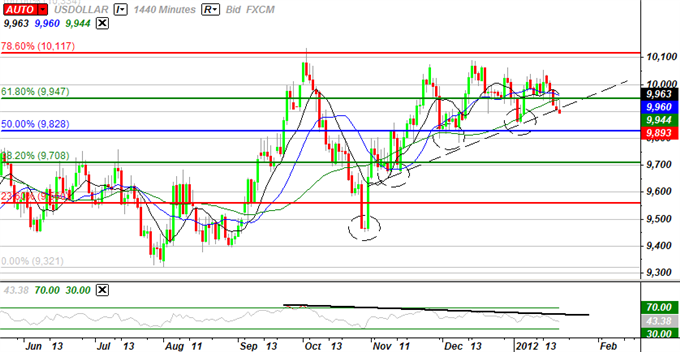 In light of the recent developments, we’re putting more weight on the bearish RSI divergence as the USD struggles to maintain the upward trend carried over from the previous year. As 9,900 gives way, the index may test the monthly low (9,856) for near-term support, and we will need to see the Fed soften its dovish tone for monetary policy in order to see the USD recoup the losses from earlier this month. As the developments coming out of the world’s largest economy reflects a more robust recovery, we should see the Fed raise its economic assessment for the region, and the central bank may talk down speculation for additional monetary support as the U.S. skirts a double-dip recession. However, as the committee embarks on increased transparency, interest rate projection from the central bank could spark whipsaw-like price action across the major currencies, and we may see a slew of dissenting views from Fed officials as the fundamental outlook for the U.S. remains clouded with high uncertainty. In turn, Chairman Ben Bernanke may keep the door open to expand monetary policy further, but it seems as though the FOMC will endorse a wait-and-see approach throughout 2012 as the economic recovery gradually gathers pace.

Three of the four components gained ground against the USD, led by a 0.41 percent against in the Australian dollar, while the Euro weakened 0.26 percent amid the deadlock surrounding Greece’s second bailout package. As European policy makers struggle to strike a deal with private investors, the recent weakness in the single currency may gather pace ahead of the EU meeting on Monday, and the single currency is likely to face additional headwinds over the near-term as the fundamental outlook for the region turns increasingly bleak. As the short-term rebound in the EUR/USD tapers off ahead of 1.3000, the pullback from 1.2985 may pick up in the days ahead, and we may see another test of the 23.6 percent Fibonacci retracement from the 2009 high to the 2010 low around 1.2630-1.2700 as the heightening risk for contagion continues to drag on investor confidence.