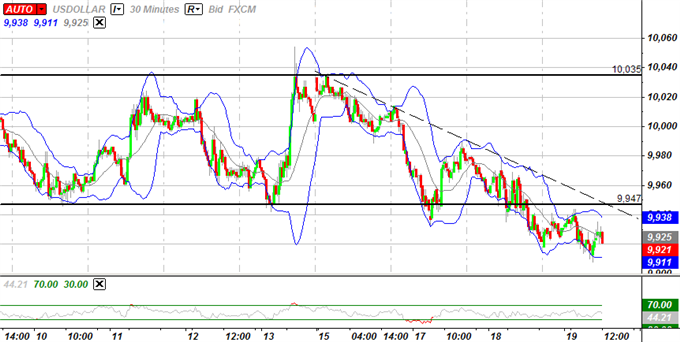 Although the Dow Jones-FXCM U.S. Dollar Index (Ticker: USDollar) remains 0.04 percent lower from the open, the reserve currency should continue to retrace the decline from earlier this week as market sentiment wavers. In turn, the shift away from risk-taking behavior should prop up the greenback over the next 24-hours of trading, and the rebound looks poised to gather pace over the near-term as the more robust recovery in the world’s largest economy dampens the prospects for additional monetary support. However, as price action comes up against the downward trendline, former support around 9,947 may come in as new resistance, and the reserve currency may ultimately give back the advance from earlier this year should market participants continue to ramp up their appetite for risk. 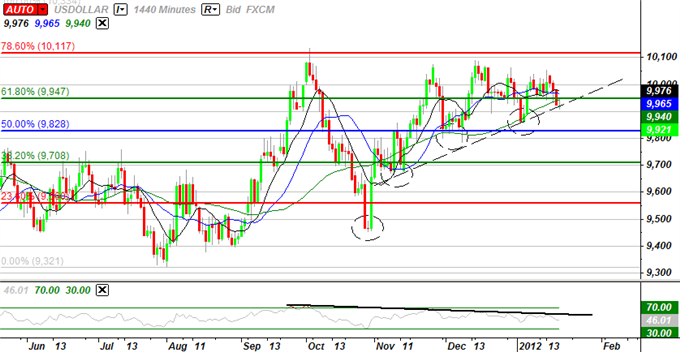 As the index threatens the upward trend carried over from the previous year, we may see the bearish divergence in the relative strength index spur a sharp decline in the USD, and the dollar may fall back towards the 50.0 percent Fibonacci retracement around 9,828 as it searches for support. In turn, we may see the greenback track within a narrow range over the near-term, but the slew of event risks of tap for the following week could increase the appeal of the reserve currency as the recovery in the world’s largest economy gradually gather space. As we’re expecting to see GDP expand at an annual rate of 3.0% in the fourth-quarter, the Federal Reserve may continue to soften its dovish outlook for monetary policy at the rate decision on tap for January 25, and the central bank may endorse a wait-and-see approach for 2012 as the U.S. skirts a double-dip recession. As a result, the USD looks poised to regain its footing over the following week, and we may see the greenback make a run at the 78.6 percent Fib (10,117) as market participants scale back speculation for another large-scale asset purchase program.

Two of the four components gained ground against the USD, led by a 0.58 percent rally in the single currency, and the technical developments points to additional Euro strength as the exchange rate breaks out of the downward trending channel carried over from the previous year. As the EUR/USD clears the 20-Day SMA at 1.2868, the rebound from the January low (1.2623) may gather pace over the next 24-hours of trading, and the pair may come up against 38.2 percent Fib from the 2009 high to the 2010 low around 1.3100-20 to test for resistance. However, as the fundamental outlook for the euro-area remains bleak, the recent bounce in the EUR/USD could turn out to be a short-term correction, and the single currency remains poised to face additional headwinds this year as the region braces for a ‘mild recession.’ As the euro-area faces an increased risk of a major economic downturn in 2012, we expect the European Central Bank to ease policy further over the coming months, and speculation for additional monetary support continues to cast a bearish outlook for the EUR/USD as the governments operating under the monetary union struggle to address the sovereign debt crisis.