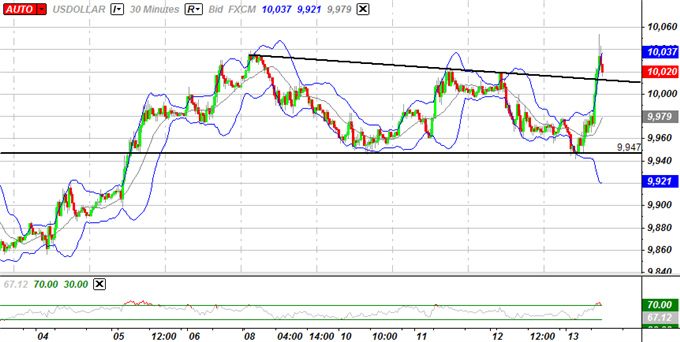 The Dow Jones-FXCM U.S. Dollar Index (Ticker: USDollar) remains 0.56 percent higher from the open after moving 172 percent of its average true range, and the bullish sentiment underlining the greenback should gather pace as the shift away from risk-taking behavior gathers pace. However, as the USD remains overbought, with the 30-minute relative strength index falling back from a high of 76, it looks like we will see the greenback consolidate going into the end of the week. Nevertheless, as price action breaks out of the descending triangle, the upper bounds of the consolidation pattern may act as support, and the USD should appreciate further in the days ahead as we expect the drop in risk appetite to carry into the following week. 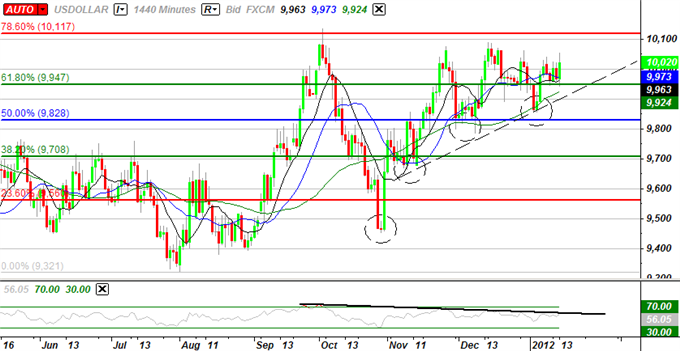 As the USD maintains support around the 61.8 percent Fibonacci retracement (9,947), the index appears to be putting in another higher low, and we will look for another run at the 78.6 percent Fib (10,117) next week as investor confidence wanes. As the 10-Day SMA (9,963) is on its way to push back above the 20-Day SMA (9,973), the bullish crossover certainly reinforces our view, and the USD looks primed for a breakout as price action approaches the apex of the ascending triangle. In light of the recent developments, the bearish RSI divergence appears to be a bad signal, and we will maintain our bias for more USD strength as risk sentiment falters.

All four components lost ground against the greenback on Friday, led by a 1.12 percent decline in the Euro, and the single currency is likely to face additional headwinds over the near-term as the fundamental outlook for the region turns increasingly bleak. Indeed, reports that Standard and Poor’s will downgrade France, Spain, Italy, Belgium, Portugal and Austria weighed on the exchange rate, and we expect the EUR/USD to fall further in the week ahead as itmaintains the downward trending channel from the end of October. As the 23.6 percent Fib from the 2009 high to the 2010 low gives way, we expect the bearish momentum to gather pace, and the exchange rate may come up against 1.2500 to test for psychological support.