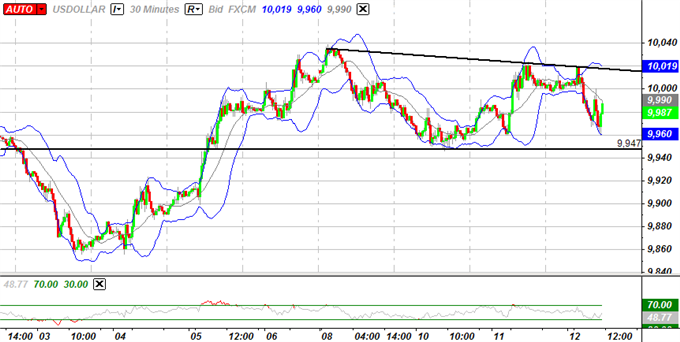 The Dow Jones-FXCM U.S. Dollar Index (Ticker: USDollar) remains 0.28 percent lower from the open after moving 89 percent of its average true range, and the greenback may continue to recoup the losses from the overnight trade as the 30-minute relative strength index bounces back from a low of 31. In turn, the USD looks poised to work its way back towards the upper Bollinger Band around 10,019, but the dollar may have carved out a near-term top as the index trades within a descending triangle. As market participation tends to thin ahead of the weekend, we should see the index continue to trade within the consolidation pattern, and the reserve currency may breakdown in the week ahead as risk sentiment picks up. 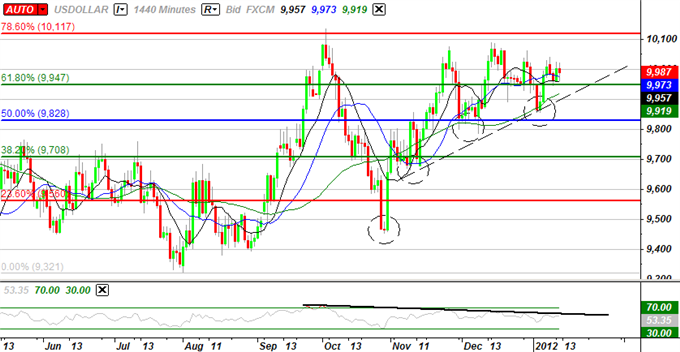 Although the 30-minute chart reflects a bearish outlook for the USD, the longer-term picture points to additional USD strength as it continues to find support around 61.8 percent Fibonacci retracement around 9,9947. As long as the key Fib holds, we expect to see another run at the 78.6 percent Fib (10,117), but the index looks primed for a bullish breakout as we look for a higher high. As the upward trendline coincides with the 50-Day SMA (9,679), the daily chart points to additional USD strength, but we will keep a close eye on the RSI divergence as the technical outlook continues to paint a mixed picture for the reserve currency.

Three of the four components advanced against the greenback, led by the 0.87 percent rally in the Euro, but the recent strength in the single currency is likely to be short-lived as the fundamental outlook for the region deteriorates. Indeed, the European Central Bank kept the benchmark interest rate at 1.00%, and it seems as though the Governing Council will maintain its current policy throughout the first-quarter as the EU steps up its effort to address the sovereign debt crisis. However, ECB President Mario Draghi defends the central bank’s Long-Term Refinancing Operation, the move suggests that the Governing Council will take additional steps to shore up the banking system, but we may see the central bank ultimately lay the foundation for a zero interest rate policy as the region faces a growing risk of a major economic downturn. As the EUR/USD continues to find support around the 23.6 percent Fib from the 2009 high to the 2010 low around 1.2630-50, the short-term correction should pan out over the remainder of the week, but the exchange rate may track lower in the days ahead as it maintains the downward trending channel from the end of October.