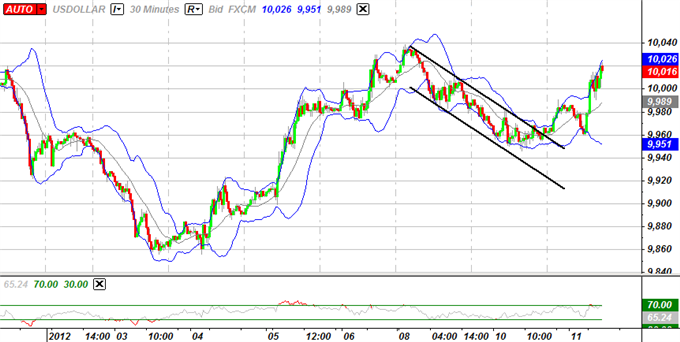 The Dow Jones-FXCM U.S. Dollar Index (Ticker: USDollar) is 0.45 percent higher from the open as market participants scaled back their appetite for risk, and the rebound from 9,946 may gather pace over the next 24-hours of trading as the index breaks out of the downward trending channel. As the recent developments coming out of the world’s largest economy highlight a more robust recovery, we should see the Federal Reserve soften its dovish tone for monetary policy, and the Beige Book could heighten the bullish sentiment surrounding the greenback as market participants scale back speculation for another large-scale asset purchase program. However, as the 30-minute RSI falls back from a high of 71, the technical outlook certainly points to a short-term correction, and we may see the index hold steady ahead of the central banks economic report as market participants weigh the prospects for future policy. 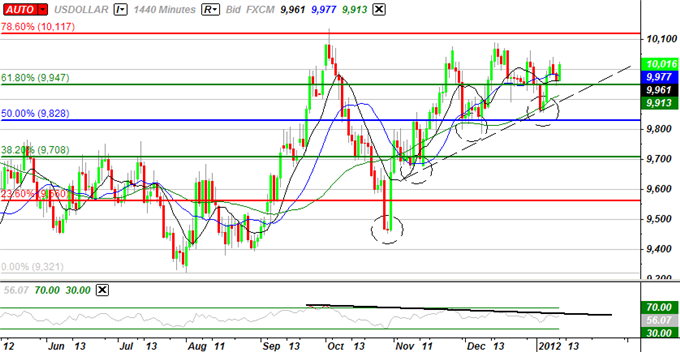 As the USD holds key support at the 61.8 percent Fibonacci retracement (9,947), we’re putting less emphasis on the bearish RSI divergence, and the dollar index looks poised to mark a higher high as the fundamental outlook for the United States picks up. As a result, we may see the greenback make another run at the 78.6 percent Fib (10,117) over the remainder of the week, but a bullish breakout remains on the horizon as price action approaches the apex of the ascending triangle. In turn, the greenback may retrace the downturn from December 2010 (10,334), and the USD may outperform against its major counterparts throughout 2012 should the Fed see scope to conclude its easing cycle this year.

Indeed, all four components lost ground on Wednesday, led by a 0.85 percent decline in the British Pound, while the Euro shed 0.68 percent ahead of the European Central Bank interest rate decision. Although the ECB is widely expected to keep the benchmark interest rate at 1.00%, the press conference with central bank President Mario Draghi could spur a sharp selloff in the single currency as we expect the Governing Council to strike a dovish outlook for monetary policy. As the fundamental outlook for the euro-area turns increasingly bleak, the 23.6 percent Fib from the 2009 high to the 2010 low around 1.2630-50 may give way, which could open the door for a test of the August 2010 low at 1.2586.