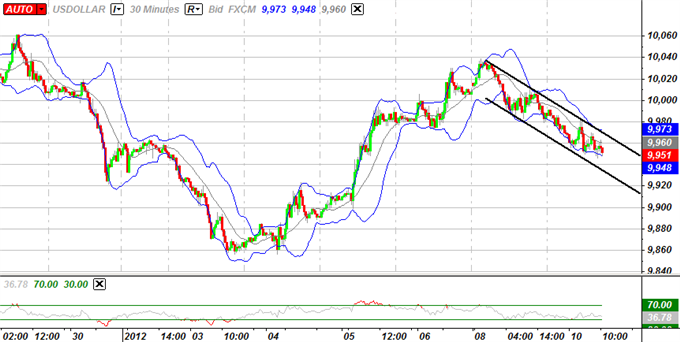 The Dow Jones-FXCM U.S. Dollar Index (Ticker: USDollar) remains 0.23 percent lower from the open after moving 66 percent of its average true range, and the greenback may weaken further over the next 24-hours of trading as price action remains confined in a downward trend channel. However, as the 30-minute relative strength index holds above oversold territory, the lack of momentum to push below 30 could set the stage for a short-term correction, and we may see the index work its way back towards the upper Bollinger Band around 9,973, which coincides with the bounds of the downward trending channel. As the recovery in the world’s largest economy gradually gathers pace, the Fed’s Beige Book may highlight an improved outlook for the region, and the report may prop up the greenback should we see the central bank talk down speculation for additional monetary support. 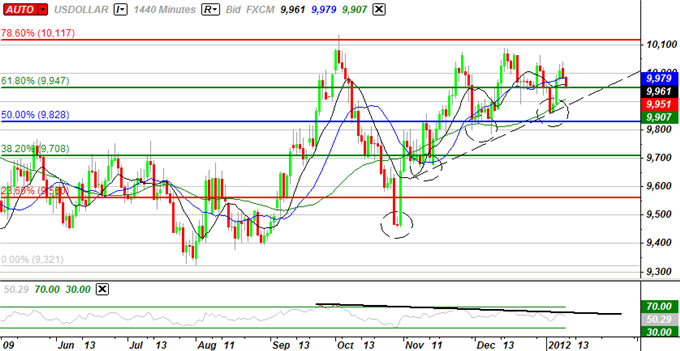 The bearish RSI divergence on the daily chart continues to instill a mixed outlook for the USD, but it seems as though the index is finding near-term support around the 61.8 percent Fibonacci retracement around 9,947, which could pave the way for a higher high. In light of the recent developments coming out of the world’s largest economy, the more robust recovery may encourage the central bank to raise its fundamental assessment for the region, and the Beige Book may spark a bullish reaction in the reserve currency as it dampens the scope for another large-scale asset purchase program. In turn, the 61.8 percent Fib may ultimately hold up as new support, which could spark another run at the 78.6 Fib around 10,117. As the index appears to be stuck within an ascending triangle, it seems as though there’s a greater chance of seeing a major move to the upside, and the bullish sentiment underlining the USD should gather pace over the near-term as we expect the Federal Reserve to talk down expectations for QE3.

All four components gained ground against the USD, led by a 0.87 percent advance in the Australian dollar, while the British Pound gained another 0.12 percent on Tuesday. Although the Bank of England is scheduled to convene later this week, the policy meeting may fail to product volatility in the exchange rate as the central bank is widely expected to keep the benchmark interest rate at 0.50 percent while maintaining its asset purchase program at GBP 275B. Should the BoE refrain from releasing a policy statement, market participants will certainly look forward to the meeting minutes due out on January 25, but the U.K. event risks on tap for later this week may weigh on the exchange rate as we’re expecting to see a slowdown in economic activity paired with easing price pressures. As the GBP/USD maintains the broad range from the end of December, we should see the pound-dollar trend sideways over the near-term, but the sterling remains at risk of facing additional headwinds in the days ahead as market participants expect to see the BoE expand monetary policy further in 2012.