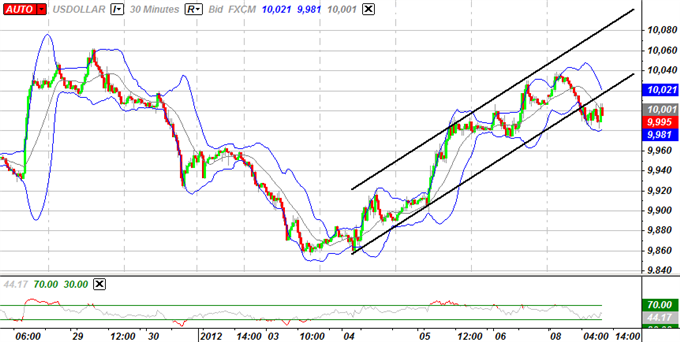 Although the Dow Jones-FXCM U.S. Dollar Index (Ticker: USDollar) remains 0.05 percent lower on the day, the rebound in risk-taking behavior appears to be tapering off as the sovereign debt crisis continues to drag on investor confidence. As the 30-minute relative strength index bounces back from a low of 31, the rebound in the index looks poised to gather pace over the next 24-hours of trading, and we may see the reserve currency continue to recoup the losses from the previous month as the developments coming out of the world’s largest economy dampens the scope for another large-scale asset purchase program. However, the pullback from 10,039 may turn into a broad-based correction as the index breaks out of the upward trending channel, and the USD may consolidate over the coming days as market participants weigh the prospects for future policy. 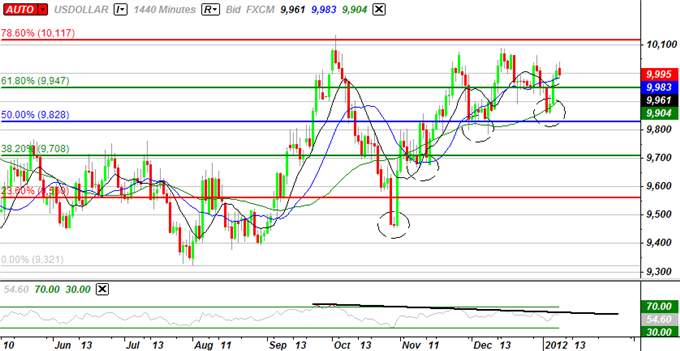 Indeed, we are still keeping a close eye on the bearish RSI divergence, but it seems as though we could still get another run at the 78.6 percent Fibonacci retracement (10,117) as the index continues to mark higher lows. In order to see a bullish breakout in the USD, we will need to see the Federal Reserve further soften its dovish tone for monetary policy, but Chairman Ben Bernanke may keep the door open to expand monetary policy further in an effort to shield the U.S. banking sector from the ongoing turmoil in the world financial system. As European policy makers struggle to stem the heightening risk for contagion, the FOMC may extend its easing cycle to shore up the economy, and the committee may show an increased willingness to expand its balance sheet further as the fundamental outlook for the globe remains clouded with high uncertainty. However, the more robust recovery could spur a rift within the Board of Governors as the recent developments raises the outlook for growth and inflation, and a growing number of Fed officials may argue against QE3 as the economy skirts a double-dip recession.

Three of the four components advanced against the greenback, led by a 0.17 percent rally in the Euro, while the Australian dollar slipped 0.15 percent as the isle-nation’s retail sales report fell short of market expectations. As the slowdown in global trade dampens the outlook for Australia, market participants expect to see further rate cuts in 2012, and the recent weakness in the high-yielding currency looks poised to gather pace as the fundamental outlook for the region turns increasingly bleak. According to Credit Suisse overnight index swaps, market participants are looking to a 25bp rate cut at the next rate decision scheduled for February 6, but see borrowing costs falling by 100bp over the next 12-months as the RBA curbs its fundamental assessment for the region. As the AUD/USD remains capped by the 200-Day SMA (1.0417), we should see the exchange rate give back the rebound from back in November (0.9663), and the pair may fall back towards the 50.0 percent Fib from the 2010 low to the 2011 high around 0.9570-0.9600 to test for near-term support.