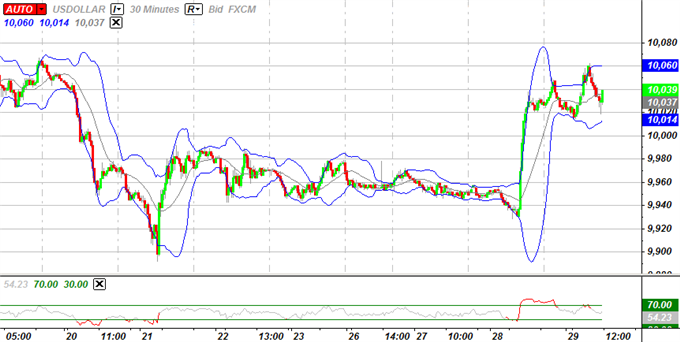 The Dow Jones-FXCM U.S. Dollar Index (Ticker: USDollar) remains 0.11 percent higher on the day after moving 68 percent of its average true range, and the reserve currency may trade heavy over the next 24-hours as risk appetite returns to the foreign exchange market. Indeed, the much better-than-expected U.S. Pending Home Sales report has propped up market sentiment, but the rebound in risk-taking behavior could be short-lived as the outlook for 2012 remains clouded with high uncertainly. As the slowdown in global growth paired with the heightening risk for contagion drags on investor confidence, we may see the flight to safety gather pace in the following year, but fundamentals may play a greater role in 2012 as the recent developments dampen the scope for another large-scale asset purchase program. 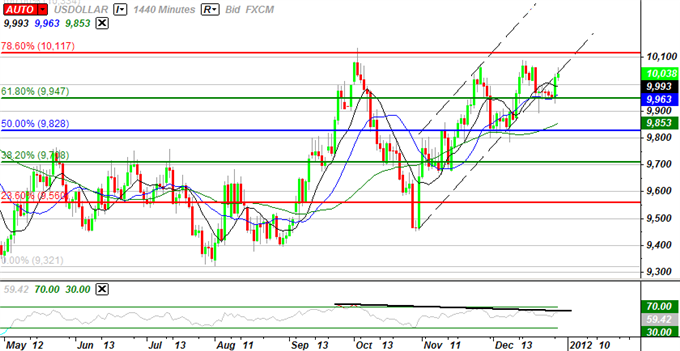 As the developments coming out of the world’s largest economy points to a more robust recovery, we should see the FOMC continue to soften its dovish tone for monetary policy, and the central bank may conclude its easing cycle in the following year as growth prospects improve. In turn, we should see the correlation between risk and the USD breakdown in 2012, and fundamentals are likely to dictate price action for the greenback as Fed officials talk down speculation for QE3. However, Fed Chairman Ben Bernanke may endorse a wait-and-see approach in the year ahead as the sovereign debt crisis threatens the global financial system, and the central bank head may keep the door open to expand policy further in order to shield the U.S. economy. Nevertheless, we still expect to see a higher high in the dollar index as it carves out a higher low in December, and we may finally get a run at the 78.6% Fibonacci retracement around 10,117 as market participation returns.

Two of the four components weaken against the dollar, led by a 0.49 percent decline in the British Pound, while the Japanese Yen advanced 0.26 percent against its U.S. counterpart. Indeed, market participants are keeping a close eye on the USD/JPY as the recent decline in the exchange rate raises the risk for an intervention, but the weakening outlook for Japan could dampen the appeal of the low-yielding currency as the region faces an increased risk for deflation. As growth and inflation falter, we are likely to see the Bank of Japan take additional steps to stimulate the ailing economy, but the central bank may refrain from jumping into the FX market as the previous efforts have failed to materialize. In turn, the BoJ is likely to further expand its asset purchase scheme in 2012, but the central bank may face increased pressures to specifically target the local currency as it dampens the scope of seeing an export-led recovery.