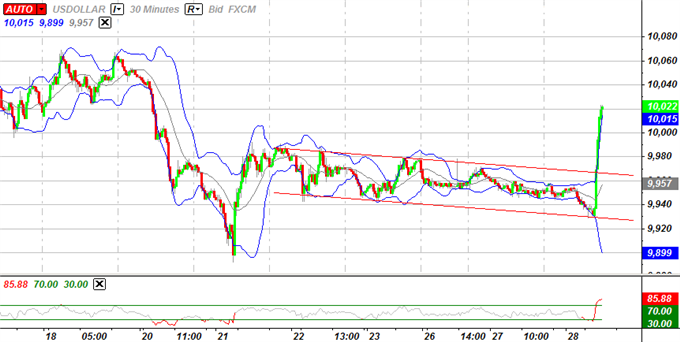 USD Correction On Tap, British Pound To Hold Range Ahead Of 2012

The Dow Jones-FXCM U.S. Dollar Index (Ticker: USDollar) is 0.73 percent higher from the open after moving 135 percent of its average true range, and the shift in trader sentiment should prop up the greenback over the next 24-hours of trade as it benefits from safe-haven flows. As market participants scale back their appetite for risk, the flight to safety should gather pace over the remainder of the week, and bullish sentiment underlining the reserve currency should carry into 2012 as the fundamental outlook for the world’s largest economy improves. However, as the rebound from 9,929 remains heavily overbought, we may see a short-term correction during the overnight session, and the index may fall back towards 9,980 before it continues to move higher. 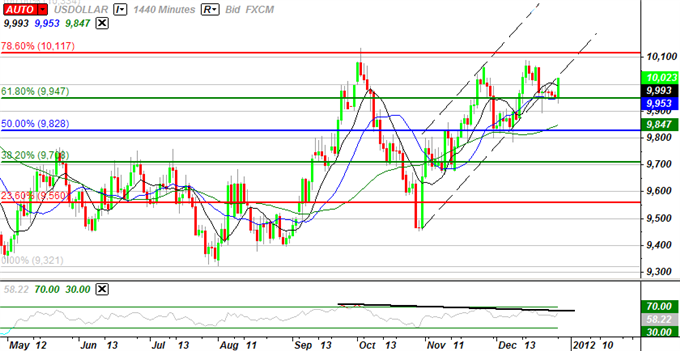 The daily chart continues to generate a mixed view for the USD as we closely watch the bearish divergence in the relative strength index, but its seems as though the 61.8 percent Fibonacci retracement will act as near-term support as the index carves out a higher low in December. The upward trend in the moving averages points to more dollar strength over the near-term, and the USD should make another run at the 78.6 percent Fib (10,117) as we expect to see a higher high in the index. For 2012, a major driving force for the dollar will certainly be monetary policy as the Fed carries its wait-and-see approach into the following year, and we may see the FOMC endorse a neutral policy stance in the coming months as the economic recovery in the U.S. gradually gathers pace. As the more robust recovery limits the scope for another round of quantitative easing, the central bank should continue to carry out ‘Operation Twist’ next year, and we may see Fed Chairman Ben Bernanke soften his dovish tone for monetary policy as growth and inflation picks up.

All four components weakened against the greenback, led by a 1.28 percent decline in the British Pound, and the sterling is likely to face additional headwinds over the near-term as the U.K. teeters on the brink of a recession. In turn, we expect the Bank of England to expand its asset purchase program beyond the GBP 275B target, but the central bank may take aggressive steps to shore up the ailing economy as policy makers see an increased risk of undershooting the 2 percent target for inflation. However, as the GBP/USD maintains the broad range from the end of November, the exchange rate looks as though it will continue to trend sideways ahead of the New Year, and we may see the rebound from 1.5460 gather pace over the next 24-hours of trading as the pair remains oversold.