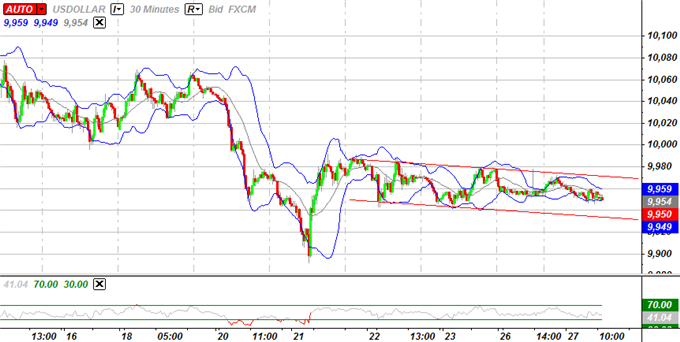 The Dow Jones-FXCM U.S. Dollar Index (Ticker: USDollar) remains 0.09 percent lower from the open after moving 39 percent of its average true range, and the greenback may track lower over the next 24-hours of trading as it trades within a downward trending channel. As the USD maintains the narrow range carried over from the previous week, it seems as though we will see the index consolidate over the next 24-hours of trading, but we may see a major shift in market sentiment as the outlook for 2012 turns increasingly bleak. As a result, we may see the rebound from 9,892 gather pace in the coming days, which could pave the way for a bullish breakout in the USD. 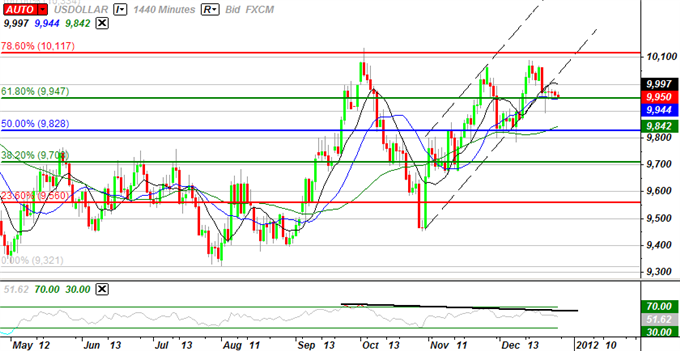 Although we’re closely watching the bearish divergence in the relative strength index, the reserve currency certainly appears to be carving out a higher low around the 61.8 percent Fibonacci retracement (9,947), and we may see the greenback make another run at the 78.6 percent Fib (10,117) as we still anticipate to see a higher high in the USD. As the recovery in the world’s largest economy gradually gathers pace, the Federal Reserve should continue to soften its dovish tone for monetary policy, and thinning bets for another large-scale asset purchase program instills a bullish bias for the dollar as the central bank concludes its easing cycle. In turn, the FOMC may see scope to start normalizing monetary policy in the second-half of 2012, and we may see the reserve currency outperform in the following year as the fundamental outlook improves.

Three of the four components gained ground against the dollar, led by a 0.21 percent rally in the British Pound, while the Australian dollar shed 0.11 percent as market participants scaled back their appetite for risk. Indeed, the high-yielding currency is likely to face additional headwinds next year as the Reserve Bank of Australian carries its easing cycle into 2012, and we may see the central bank take aggressive steps to shield the isle-nation as the slowdown in global trade dampens the outlook for growth. According to Credit Suisse overnight index swaps, market participants see borrowing costs falling by more than 100bp over the next 12-months, and we may see interest rate expectations deteriorate further in the coming months as the RBA Governor Glenn Stevens adopts a dovish outlook for monetary policy. As the AUD/USD struggles to push back above the 50-Day SMA (1.0169), the pair appears to have carved out a lower higher ahead of the New Year, and the exchange rate may give back the rebound from November (0.9663) should we see a flight to safety emerge in the days ahead.