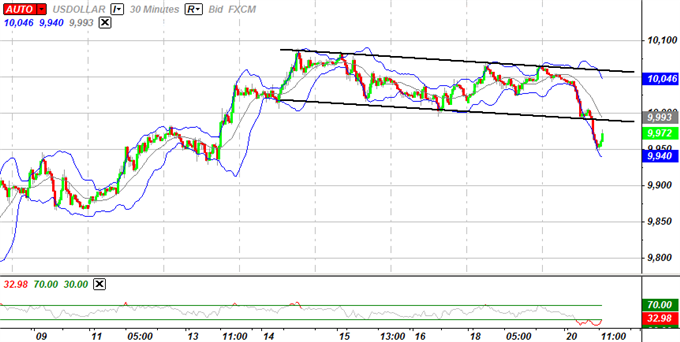 The Dow Jones-FXCM U.S. Dollar Index (Ticker: USDollar) remains 0.91 percent lower from the open after moving 132 percent of its average true range, but we should see the reserve currency regain its footing once the 30-minute relative strength index pushes back above 30. As the USD remains oversold, we will be looking for a rebound going into the middle of the week, and the index may revert back to the upper Bollinger Band around 10,058 as it appears to be finding intraday support around 9,950. However, as commercial banks in the euro-area prepare to tap the European Central Bank’s three-year lending facility, the rise in risk-taking behavior may gather pace over the next 24-hours, and the pickup in market may continue to bear down on the USD as investors continue to treat the reserve currency as a safe-haven. 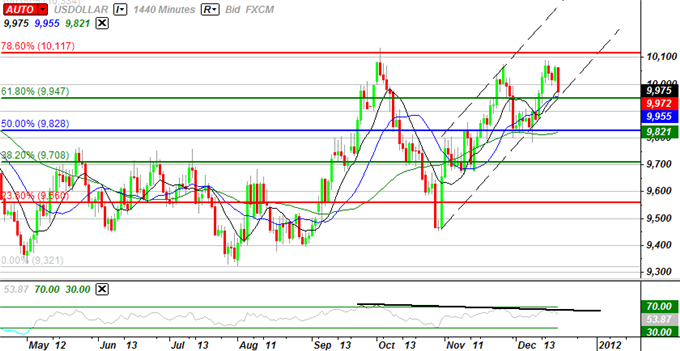 As the index appears to be finding support around the 61.8% Fibonacci retracement at 9,947, we should see the USD maintain the upward trending channel from the end of October, which could pave the way for a higher high. As the developments coming out of the world’s largest economy highlight an improved outlook for future growth, as should see the Federal Reserve continue to soften its dovish rhetoric for monetary policy, and the greenback looks poised to appreciate further in 2012 as market participants scale back expectations for another large-scale asset purchase program. However, as there appears to be a bearish divergence in the relative strength index, we may see the USD breakout of the upward trend ahead of the new year, and the greenback may consolidate going into 2012 as Fed Chairman Ben Bernanke keeps the door open to expand monetary policy further.

The greenback weakened against all four counterparts, led by a 1.69 percent rally in the Australian dollar, which was following by the 1.06 percent advance in the British Pound. However, as we have the Bank of England meeting minutes on tap for Wednesday, the policy statement could trigger a selloff in the exchange rate as we expect the central bank to maintain a dovish outlook for monetary policy. As the slowing recovery in the U.K. raises the risk of undershooting the 2 percent target for inflation, we expect the BoE to carry its easing cycle into the following year, and the Monetary Policy Committee may talk up speculation for additional monetary support as it aims to stem the downside risks for the economy. As the GBP/USD struggles to hold above the 38.2% Fib retracement from the 2009 low to high around 1.5680-1.5700, we should see the pair trend lower over the next 24-hours of trading, and the BoE minutes could heighten the bearish sentiment underlining the sterling as the central bank looks to increase its asset purchase program beyond the GBP 275B target.