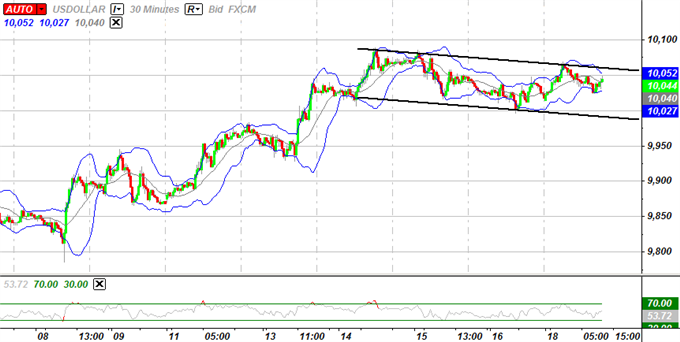 USD Weakness To Be Short-Lived, RBA Minute To Drag On Aussie

The Dow Jones-FXCM U.S. Dollar Index (Ticker: USDollar) remains 0.20 percent higher from the open after moving 56 percent of its average true range, and it seems as though the greenback is carving out a floor around 10,000, which could pave the way for a short-term rally in the reserve currency. As the Federal Reserve softens its dovish tone for monetary policy, easing bets for another round of quantitative easing continues to support a bullish outlook for the greenback, and we should see the USD push higher over the remainder of the year as the central bank holds an improved outlook for the world’s largest economy. However, as the USD appears to be consolidating within a downward trending channel, the pullback in the reserve currency may turn into a larger correction, and the index may fall back towards 10,000 before we see a run at the yearly high (10,134). 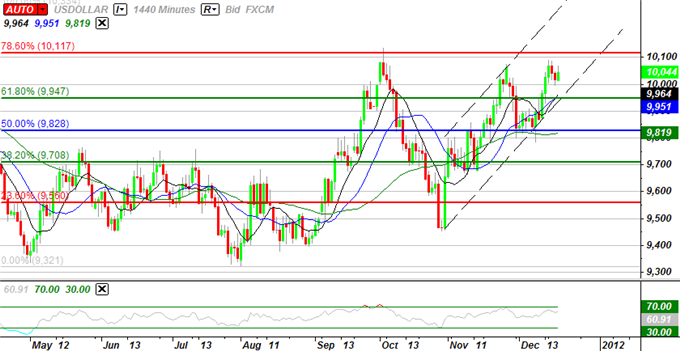 As Fed officials expect the economic recovery to gather pace in the following year, we should see the central bank continue to highlight an improved outlook for the region, and Chairman Ben Bernanke may see scope to start normalizing monetary policy in the second-half of 2012 as the risk of a double-dip recession subside. In turn, the bullish sentiment surrounding the USD should gather pace over the coming months, and we are still looking for a higher high as the index trades within a broad upward trending channel on the daily chart. However, as the European debt crisis bears down on the work economy, the central bank head may keep the door open to expand policy further, and we may see the FOMC maintain a wait-and-see approach throughout the following year as it aims to encourage a sustainable recovery.

All four components weakened against the USD, led by a 0.62 percent decline in the Australian dollar, and the high-yielding currency may face additional pressures over the next 24-hours of trading should the central bank show an increased willingness to ease monetary policy further in 2012. Indeed, the Reserve Bank of Australia meeting minutes are likely to cast a dour outlook for the region as the economy faces a slowing recovery, and the central bank may see scope to lower the benchmark interest rate further as growth and inflation falter. According to Credit Suisse overnight index swaps, market participants are pricing a 45 percent chance for another rate cut in February, but see borrowing costs falling by more than 125bp over the next 12-months as the fundamental outlook for Australia deteriorates. In turn, dovish comments from the RBA is likely to spark a bearish reaction in the AUD/USD, and we may see the pair give back the rebound from the previous month (0.9663) as market participants increase bets for additional monetary support.