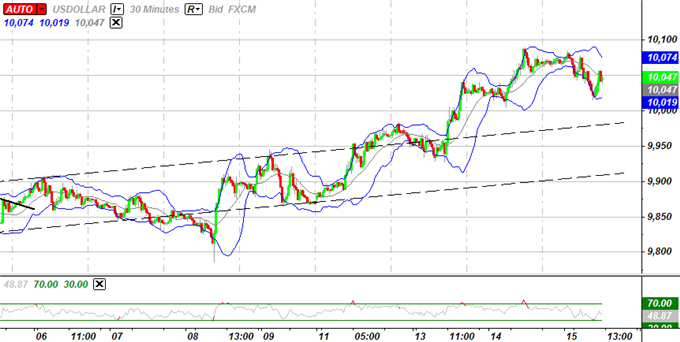 The Dow Jones-FXCM U.S. Dollar Index (Ticker: USDollar) remains 0.17 percent lower from the open after moving 82 percent of its average true range, and it seems as though we will see the greenback consolidate throughout the North American trade as the 30-minute relative strength index bounces back from oversold territory. In turn, we may see the USD work its way back towards the upper Bollinger Band around 10,079, but the bullish sentiment underlying the reserve currency may gather pace over the remainder of the year as market participants scale back speculation for another large-scale asset purchase program. As the economic docket is expected to show the headline reading for inflation holding steady at an annualized 3.5 percent, the stickiness in price growth could spark a bullish reaction in the USD, and the index looks poised to track higher over the remainder of the week as the developments dampen expectations for additional monetary support. 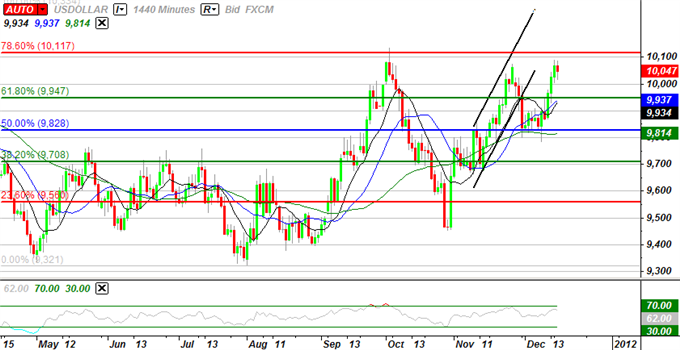 As the economic recovery gradually gathers pace, we should see Fed Chairman Ben Bernanke continue to soften his dovish tone for monetary policy, and we are likely to see the central bank maintain its current policy throughout the following year as the committee carries out ‘Operation Twist.’ As growth prospects improve, we should see the FOMC talk down expectations for another round of quantitative easing, and the central bank may see scope to start normalizing monetary policy towards the end of 2012 as the economy skirts a double-dip recession. In turn, we may see the USD carve out a higher high ahead of the following year, and future comments from the Fed may help to prop up the reserve currency as the central bank holds an improved outlook for the region.

All four components advanced against the greenback, led by a 0.24 rally in the Australian dollar, while the Japanese Yen is trading 0.23 percent higher from the open. As the DailyFX Speculative Sentiment index for the USD/JPY stands at 4.42, it seems as though retail traders are maintaining bets to see another currency intervention from Japan’s Ministry of Finance, but we may see the government stick to the sidelines as the exchange rate continues to holds above 77.00. Indeed, it seems as though the USD/JPY has carved out a major bottom this year as there appears to be a bullish crossover in the moving averages, and the pair looks poised to push higher over the remainder of the year as it trades within an upward trending channel. In turn, threats for another intervention should continue to subside, and we may see the exchange rate push higher in the following year as the bullish sentiment underlying the USD gathers pace.