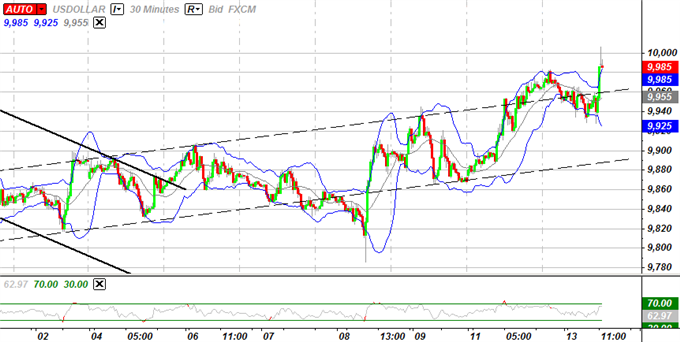 The Dow Jones-FXCM U.S. Dollar Index (Ticker: USDollar) is 0.24 percent higher from the open after moving 92 percent of its average true range, and the reserve currency may appreciate further as the flight to safety gathers pace. As fears surrounding the sovereign debt crisis bears down on market sentiment, the shift away from risk-taking behavior should help to prop up the reserve currency, but we may see a small pullback in the index as the 30-minute relative strength index approaches overbought territory. However, we are likely to see increased volatility later today as the FOMC interest rate decision takes center stage, and the developments coming out of the central bank may spark a bullish reaction in the USD should Chairman Ben Bernanke soften his dovish tone for monetary policy. 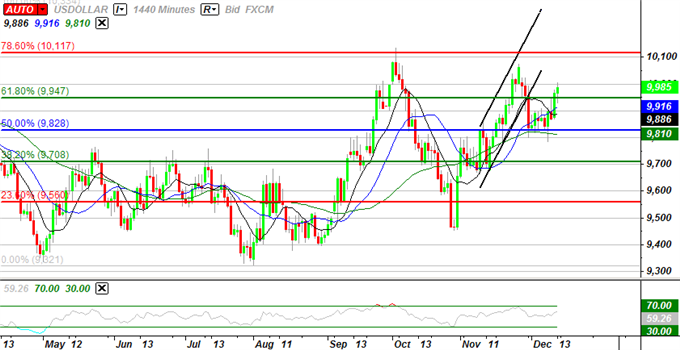 As the USD continues to retrace the reversal from 10,074, we may see the index carve out a higher high ahead of the following year, and the greenback may appreciate further in 2012 should the FOMC see limited scope for another large-scale asset purchase program. Although the Fed is widely expected to maintain its current policy in December, the committee may strike an improved outlook for the world’s largest economy as central bank officials expect the recovery to gradually gather pace over the coming months. However, we may see Fed Chairman Bernanke preserve a dovish tone for monetary policy given the ongoing weakness in employment paired with the protracted recovery in the housing market, and the central bank head may keep the door open to expand monetary policy further in order to stem the downside risk for growth and inflation. In response, we may see market participants move away from the USD, and we may see the index fall back towards the 61.8 percent Fibonacci retracement around 9,947 to test for near-term support.

Two of the four components weakened against the USD, led by a 0.74 percent decline in the Euro, and the single currency is likely to face additional headwinds over the near-term as European policy makers struggle to meet on common ground. Indeed, German Chancellor Angela Merkel talked down expectations of expanding the permanent European bailout fund, and the new development instills a dour outlook for the euro-area as the European Central Bank continues to defy calls to expand its nonstandard measures.As the ECB moves away from expanding its asset purchase program, it seems as though President Mario Draghi will continue to target the benchmark interest rate to stem the downside risks for growth and inflation, and we are likely to see the bearish sentiment underlying the single currency carry into the following year as the fundamental outlook for the euro-area turns increasingly bleak. As the EUR/USD gives back the advance from the beginning of the year, we may see the exchange rate threaten the rebound from 1.2872, and the single currency may weaken further in 2012 as the region faces an increased risk of a major economic downturn in 2012.