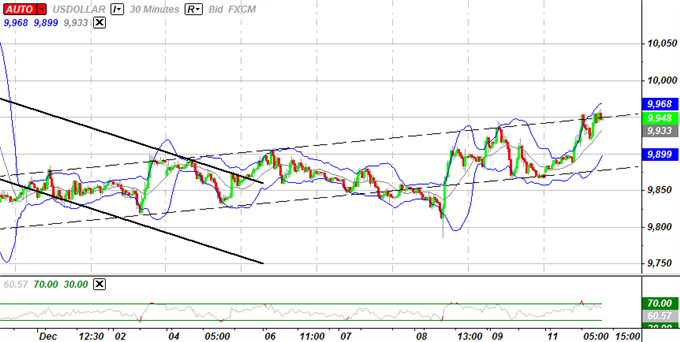 The Dow Jones-FXCM U.S. Dollar Index (Ticker: USDollar) remains 0.78 percent higher from the open after moving 93 percent of its average true range, and we may see the greenback stay afloat throughout the North American trade as it benefits from the shift-away from risk-taking behavior. As the USD maintains the upward trend from earlier this month, the reserve currency may track higher over the remainder of the year, but we may see a small correction ahead of the Fed interest rate decision as the 30-minute relative strength index falls back from a high of 78. In turn, the index may fall back towards trendline support around 9,880 before we get another run to the upside, and the bullish sentiment underling the USD may carry into the following year as the fundamental outlook for the world’s largest economy improves. 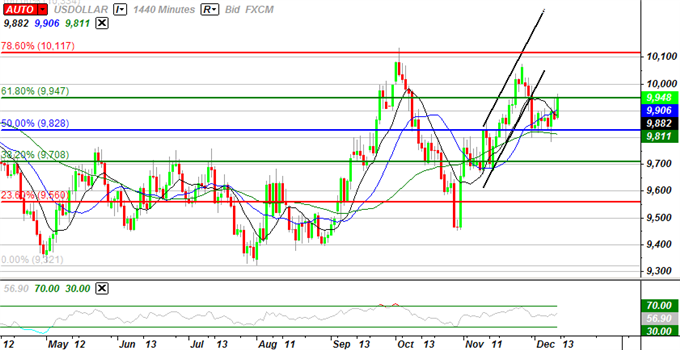 As the USD carves out a lower high in December, the index appears to be coiling up to make another run at the 78.6 percent Fibonacci retracement around 10,117, and we should see the index carve out a higher high over the near-term as Fed officials expect the recovery to gradually gather pace over the coming months. Indeed, the FOMC is widely expected to carry its current policy into 2012 given the pickup in economic activity, and we may see the central bank talk down speculation for another large-scale as policy makers see a diminishing risk of a double-dip recession. However, as Chairman Ben Bernanke continues to highlight the ongoing weakness in the labor market paired with the slowdown in price growth, the central bank head may keep the door open for QE3, and we may see a growing rift within the FOMC as the outlook for the world economy turns increasingly bleak.

All four components weakened against the greenback on Monday, led by a 1.31 percent decline in the Euro, and the single currency is likely to face additional headwinds over the near-term as optimism surrounding the new fiscal accord deteriorates. Indeed, the warning shots fired by Moody’s and Standard and Poor’s presents the short-term risk for the single currency, and we may see a sharp selloff in the exchange rate should the agencies lower their credit rating for the euro-area. As the governments operating under the monetary union face record-high financing costs, we are likely to see an increased reliance for monetary support, but it seems as though the European Central Bank will continue to move away from its nonstandard measures as there’s a growing rift within the Governing Council. In turn, we expect ECB President Mario Draghi to push the benchmark interest below 1.00 percent in 2012, but the central bank may have little choice but to expand its balance sheet further as the region faces an increased threat of a deep economic contraction in the following year. As the EUR/USD gives back the advance from 1.3145, we may see pair threaten the rebound from January (1.2903), and the exchange rate may weaken further over the coming months as the fundamental outlook for Europe turns increasingly bleak.